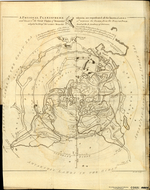 A PLAN OF BRIDGE TOWN, in the ISLAND of BARBADOES
Detailed plan of Bridgetown, Barbados. Depiction of Church yard, The Swamp, Willoughby Fort, Kames Fort, and Magazine. The unshaded area was destroyed by fire in May 1766. Coastline shows Cox's Bay and Fisherman's Dock., Map of Bridgetown, located on the island of Barbados. Prime Meridian is unknown due to lack of information and graticule. Map reads with North facing to the top of the map. There is one scale bar located on the bottom right hand side of the map, represented in Yards.

A PLAN OF CHALEUR BAY IN THE GULF OF St. LAURENCE Surveyed by His Majesty's Ship NORWICH in 1760
According to Skelton & Tooley (#13) the imprint is indicative of the 1st state of the North American Pilot. While several maps in the North American Pilot were previously published, the Chaleur Bay map was not. Notes underwater features and fishing banks., Scale bar in leagues. Navigation information like soundings, rhumb lines and current direction present.

A PLAN OF MAESTRICHT, with the Adjacent Villages where the Battle was fought June 21
Details map of the fortifications at Maastricht, Netherlands built by the Spanish and Dutch. The French conquered the city during the War of Austrian Succession. Later in 1815, this region became part of the United Kingdom of the Netherlands. Map topography indicated villages by etching churches in those locations., Map of the city of Maastricht, found in the Netherlands. Prime Meridian is unknown due to lack of information and graticule on the map. There are 3 scale bars, one in English Miles, German Miles and Dutch Mile. Map reads with North reading to the top of the map 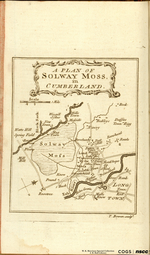 A PLAN OF SOLWAY MOSS, in CUMBERLAND
A map of the Solway Moss, a raised bog near Longtown, Cumbria, England made to accompany the author's description of its 'eruption' that occurred in 1771. Notice the ornate cartouch on this map of Solway Moss, a lowland peat bog, in Cumbria, near the Scottish border. In November 1542 it was the site of the Battle of Solway Moss, between Scotland and England. Solway Moss is now part of Carlisle district., Compare with PLAN of the SOLWAY MOSS from 1773.

A PLAN OF THE CITY OF EDINBURGH
There is a legend on the bottom indicating important places on the map., Scale was determined by measuring the distance from the Castle to Holy Rood House (Gardens). Map reads with North facing to the top left corner of the map.

A PLAN OF THE HARBOUR OF CHEBUCTO AND TOWN OF HALIFAX
Includes engravings of the Ensign of Nova Scotia along with other Coats of Arms, two butterflies, the musk beetle and a rather large, fierce looking porcupine. With the map in reading position, west is at the top., Research has indicated that either Thomas Jefferys or Moses Harris engraved this plan of Halifax. The presence of entomological drawings and of the initials MH amongst the vegetation to the left of the Bedford basin strongly suggests Harris as the engraver; the Dictionary of National Biography notes "he was a clever practical entomologist as well as an accurate artist, who drew, engraved, and coloured all his own works". While both did engravings for Gentleman's Magazine, it is documented that Harris was in Halifax at this time period.

A PLAN of FORT LOUIS
A plan of the fortifications and city of Fort Louis, France, located on what used to be a very strategically important island on the Rhine. A key A-N, 4-17 explained on page 351. The exact location of the Fort for georeferencing within a GIS is unknown due to changes in the river from canalisation projects; therefore the coordinates and scale are only estimates. Fields are shown with stippling, trees are shown pictorially, and shorelines concentrically along with some stippling. The caption at the bottom describes the location of the fortress in relation to populated areas in the region, although it is approximately 31 km upriver of Strasbourg., No scale bar or graticule are present on the map; coordinates and scale were obtained via georeferencing. 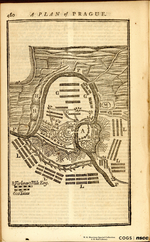 A PLAN of PRAGUE
A plan and description of some of the military positions during the 1742 Siege of Prague that took place during the War of the Austrian Succession. A lettered key from A-M is explained on page 461. As Marshall de Broglie (Broglio) had escaped the city by September, the rendering likely represents some time between the Prussians began their siege in June, and September of 1742 before Belle-Isle assumed command of the French. There legend for the map can be found within the accompanying text., The scale bars are in furlongs/English miles and Toises, and there is no graticule. Scale was calculated from the map's scale bar, and the coordinates were obtained via georeferencing.

A PLAN of QUEBEC
Insets: The Port and Environs of Quebec as it was when attack'd by the English; A Draught of the River St. Laurence. There is a detailed written description of Quebec, including its history., Scale of the main map is in yards and for the Quebec inset it is in toises (1 toises = 6 feet); there is no graticule present.

A PLAN of St. Philip's Castle, in the Island of Minorca
A large scale woodcut (somewhat larger than usual) plan of St. Phillip's Castle (Castell de Sant Felip) guarding the strategically important harbour at Minorca before its famous loss to the French in 1756. On the 29th April 1756, a French force under the command of the Duke de Richelieu landed on the island and besieged the British garrison at St. Philip's Castle, forcing them to surrender after a lengthy siege. A British relief force under Admiral John Byng sailed with the purpose of saving the island, but after the naval Battle of Minorca Byng withdrew to Gibraltar, and the resistance of the garrison finally collapsed. Byng was later blamed for the loss of Minorca, and executed by firing squad. The accompanying legend on page 281 describes the forts features; counter-guards, ravelins, and lunettes are all features of Vauban style fortifications that were common at the time. An impressive amount of detailed linework used to convey the structure of the castle and environs, No scale bar or graticule are present; coordinates and scale were obtained via georeferencing. The dimensions of the plan are quite accurate, and georeference very well.

A PLAN of the BATTLE of DETTINGEN
A plan recounting the Battle of Dettigen on the River Main (present day Karlstein am Main, Germany) that took place in June, 1743 between British, Havoverian, and Hessian forces against the French. This battle was the last time a British monarch personally led their forces during battle., No scale bar or graticule are present on the plan; coordinates and scale were obtained via georeferencing.

A PLAN of the CITY and Fortifications of ST MALO's
It's interesting to look at maps that were drawn at a time of significant events. Such is the case with this Saint-Malo map. Published in June 1758 while the final seige of Louisbourg was underway, it would be to Saint-Malo that many Acadian exiles would be sent later in 1758 and 1759., Large scale map but is quite accurate.

A PLAN of the CITY and HARBOUR of LA VERA CRUZ and the CASTLE of SAN JUAN DE ULUA Being the Key of Traffick and the principal Port of NEW SPAIN Lat: 19°:10'
Includes a description of the wares sold at the city fair shops by English, Dutch, Italians and French and the compensation arrangement with the Spanish., Map reads with North facing to the top of the map, but in actuality, it's more North/West. Prime Meridian is Unknown due to lack of graticule and information on the map, although there is reference to the map having a Latitude 19º10'.

A PLAN of the CITY, and FORTIFICATIONS, of LOUISBURG; from a Survey made by RICHARD GRIDLEY ... [on plate with] A PLAN of the CITY and HARBOUR of LOUISBURG, with the French Batteries that defended ...
Maps of the city and fort of Louisburg from 1745 and the Harbour of Louisburg with inset of Gabarus Bay during the 1758 siege by the British. The maps show British battle positions, details of the French fortifications and information on the outcome. Having such a detailed plan of the Fortress was no doubt of great use to the British as Louisbourg fell to them for the final time in 1758., Map features including fortified walls, bridges, buildings, naval fleets, light house, docks, hills, fields and marshes are depicted pictorially. Water soundings are noted for the Harbour of Louisburg and Bay Gabarus Bay. Map scale for the Fort is in Feet and the Harbour (as well as the inset) is in English Miles.