A PLAN of the proposed NAVIGABLE CANAL, from ANDOVER to REDBRIDGE, in the County of SOUTHAMPTON, Surveyd in 1770
A relief map depicting canals, rivers, bridges, and settlements along the canal. The cartouche is elaborated with scrolls., A plan of a proposed canal between Andover, Hampshire, and Millbrook, a suburb of Southampton. Like the majority of other canal maps in this collection, it is quite sparse in ornamentation, with some hatching to denote elevation and a sylvan style cartouche. The details of the locks are outlined in the table to the bottom right. The map is oriented with East at its top, and the scale bar is in English miles. Coordinates were derived via georeferencing, and the scale was calculated from the map's scale bar. This canal was eventually built with perhaps some small modifications. A good candidate for rubber sheeting as it does not match up well within the GIS.

A Particular MAP, to Illustrate Gen. Amherst's Expedition to MONTREAL; with a Plan of the Town & Draught of the Island
Map depicts General Amherst's expedition along St. Lawrence River from Quebec to the Thousand Islands and onto the Niagara River, also a plan of the city of Montreal. Included on the map are the names of First Nations such as Iroquois, Senekaa, Cayugaes, etc. An inset map details the plan of the city itself including major streets and fortifications., Prime Meridian is unknown due to lack of Graticule and information. There is a scale bar on each map. Inset map for Montreal has its own legend with place's within the City of Montreal.

A Particular Plan of the TOWN and FORT of ST. PHILIP [on plate with] A DRAUGHT of the TOWN and HARBOUR of MAHON with ST. PHILIP'S FORT and Its FORTIFICATIONS
Top map includes engraved references a-t. Bottom map with title and 5 lines of engraved text. On page 11 of the volume begins an account of the island: "A plan of St. Philip's Castle with its accompanying town, and another smaller scale plan along with the strategically important harbour and the town of Mahon, in Minorca, one of the Balearic Islands". The explanatory legend details the castle's fortifications, while soundings and coastlines are shown for the harbour. A description of the work sits below the map. engraved on map are various important structures: Nunnery, Victualing Office for the navy, Product House, Mast house, Quarantine Island, The New Road, and Navel Hospital. Fortifications are detailed as are vegetation, buildings, fathom depths, and pathways., Each map has a scale bar in furlongs, and no graticule is present in the map; the scale is calculated from the map's scale bar, and the coordinates were obtained via georeferencing and pertain to the map of the harbour.

A Perspective View of Quebec drawn on the spot
Ship and two sailboats in foreground; Quebec in background. A copper etching of a perpendicular view of Québec City drawn from across the St. Lawrence. Ships flying what appear to be the Cross of St. George appear at the forefront against the city's skyline. Accompany text in facing pages eloquently and with detail describe the harbour, flag ships, Lower-Town, Upper town, pavilions, palaces, and edifices. The description includes comments on the hardships and actions of the gallant soldiers., The coordinates refer to a single point in the image's centre to which it has georeferenced.

A Perspective View of the City of BATH
Map views cannot be fully georeferenced because the scale and perspective varies across the view.

A Plan of BREDA, with the Adjacent Countries
Prime meridian is unknown due to lack of information on the map. There are three scale bars represented on the map, English Miles, Dutch Miles and German Miles.

A Plan of CARTHAGENA
A plan of Cartegena and surrounding waters as if attacking from the west. Attacking forces and Spanish fortifications are outlined in the legend found in accompanying text. The plan shows the Isla de Tierra Bomba connected to the mainland. Churches, fields, and forests are represented pictorially; the French ships at L are not individualized. The textual explanation places the city of Cartagena approximately 675 km to the north of its actual location. A lettered key is explained on page 193., No scale bar or graticule are present on the map; the coordinates and scale were derived via georeferencing.

A Plan of CONSTANTINOPLE Places adjacent and Canal of the BLACK SEA
Map of Constantinople with key identifying 75 locations focusing on the topography of the city and surrounding area. Individual tress, plowed fields, and buildings are etched. Elaborate cartouche features military swords, other weapons, flags, and a jeweled turban., Map of Istanbul. Prime Meridian is unknown due to lack of information and graticule. There is one scale bar on the map, represented in Italian Miles. Map reads with North facing to the Left. There is an arrow in the canal that shows that the water flows from North to South. 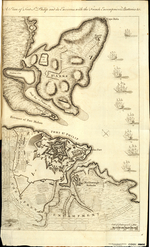 A Plan of Fort St. Philip and its Environs, with the French Encampments, Batteries, &c.
Detailed and decorative map of fortifications, walls, blockades, and water sources. Duke de Richelieu landed on the island and besieged the British garrison commonly known as the Fall of Minorca. Scale is 4 Furlongs or 1/2 mile. Of particular interest on this map are etchings of nine war ships off the coast. The references key, complete with explanations of the fort, are within the pages of the Gentleman's Quarterly specifically: Countergards, Ravelins, Lunettes, areas of attack, and places where supplies were received. The French Encampment is clearly marked., Map located just east of Spain. Map reads with North facing to the top left corner of the map. Prime Meridian is Unknown, due to lack of information on the map.

A Plan of GIBRALTAR
A plan of the British town and fortifications of the Rock at Gibraltar from an oblique view. The legend found in the accompanying text describes the pertinent features of the plan, and two ships of the line are rendered in the bay. Letters key A-O is explained on page 299., The scale bar is in English miles, and no graticule is present. The scale was calculated from the scale bar, and the coordinates were derived via georeferencing.

A Plan of HAVRE DE GRACE, and the Face of the adjacent Country
A plan of Havre de Grace (modern day Le Havre) from an oblique view showing fortifications and surrounding villages. Feathered arrows represent water flow direction, and sand banks are shown through extensive stipling. A large and bold 16 point compass rose sits prominently near the top left corner. The relief shown is extensively detailed, while the settlements are quite generalized. The Canal of Harfleur is central to the map with a large inscribed arrow indicating direction of flow. Grassland and trees are drawn to represent land cover revealing individual fields, and there are a few short descriptions of areas, including the timber words in the silt just west of Le Havre., The scale bar is in French toises, and there is no graticule; scale was calculated from the scale bar and the coordinates from georeferencing.

A Plan of LONDON and WESTMINSTER shewing the Forts erected by Order of Parliament in 1643 & the Desolation by the Fire in 1666
Retrospective map showing a plan of London and Westminster showing the 1643 defenses and the area destroyed by the Great Fire. Noted are the 23 forts shown and 18 miles of ramparts build to protect the city from attacks by Charles 1 and 15,000 Royalist troops. Accompanying text in the volume listed forts keyed numerically on map 1 - 23. Also in the text on page facing the map is a reference list to the alpha key referencing gates, tower hills, the Tower, and other important landmarks., Map of downtown London, United Kingdom. Prime Meridian is unknown due to lack of graticule. Map reads with North facing to the top of the map. Scale was determined by measuring from the bottom of the river bend on the far right side, to the bottom of the river bend on the left side of the map. There is a grid of some sort, but its labeled with letters oppose to numbers.

A Plan of PORTO BELLO
A plan of Porto Bello and surrounding waters, Panama displaying action from the War of Jenkins Ear. A lettered A-Z key is explained on page 191. Saltwater marshland is shown via stippling, The characteristics of individual ships can be discerned, while land defenses are more generalized., The accompanying legend can be found on page 191. No scale bar or graticule are present; coordinates and scale were derived via georeferencing.