A New & Correct CHART of EUROPE
Cartouche design is large stone block monument with foliage. Details all countries of Europe including Iceland, Asia, and northern coast of Africa., Map of Western Europe. Two prime meridians on the map, top is based from London, The bottom is based from Ferro. The map reads with North facing to the top of the map. Scale was determined by measuring between two degrees of Latitude.

A New & accurate MAP of the WEST INDIES and the adjacent Parts of North & South AMERICA
A unique wash coloured map shows Spanish territory as green, British as pink, French as yellow, Dutch as blue, and contested areas as dark gray/black. An elaborate yet handsome cartouche frames the work's title. Marine navigational hazards are symbolized, broken lines are used for various uses, simple hachuring is used to display relief, and parallel lines are used to differentiate figure / ground for the coastlines, No scale bar is present on the map, and it uses Ferro for its prime meridian. The scale and coordinates were calculated using the map's graticule.

A New Chart of the Coast of NEW ENGLAND, NOVA SCOTIA, NEW FRANCE or CANADA, with the Islands of NEWFOUNDL'D, CAPE BRETON, ST. JOHN's &c.
Show locations of fishing banks off Newfoundland and Nova Scotia., Includes 4 inset maps: the Atlantic Ocean; Plan of the City and Port of Louisbourg; Fort Dauphin; City of Quebec. See the accompanying article.

A New Generall CHART for the WEST INDIES of E. Wright's Projection vut. Mercators Chart
Ornate shell and botanical cartouche at upper left. Compass with fleur-de-lis at center., Unable to determine a named prime meridian, other than it is 5.9 degrees from Greenwich, determined with both math and georeferenced. The longitude graticule runs along the equator.

A New MAP of ENGLAND and WALES
Large detailed map of England and Wales detailing every hamlet, village, town, and city including rivers, roadways, coast lines, and channels. The cartouche is incredibly elaborate with waterfalls, scrolls, clusters of grapes, bees and a hive, a sleeping dog, a full cornucopia, and an urn., Prime Meridian is London. Legend in the top Left of the map. One scale bar in English Miles.

A New MAP of the BRITISH DOMINIONS in NORTH AMERICA; with the Limits of the Governments annexed thereto by the late Treaty of Peace, and Settled by Proclamation, October 7th 1763
A map of North America after the Treaty of Paris and King George's Royal Proclamation showing territories gained beyond the original 13 colonies to along the Mississippi and in Québec. Although the Proclamation is mentioned, no line is drawn to show its territorial boundaries. The inset map shows the Florida peninsula that is beyond the southern extent of the main map. An elaborate scroll motif cartouche frames the title including authority and date. Map engraved for the History of War story in the Annual Register., Two scale bars are present in British and French sea leagues and British Statute miles and London is used for the prime meridian; the scale was calculated from the scale bar and the coordinates from the map's graticule. 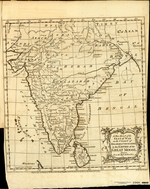 A New MAP of the SEAT of WAR on the COAST of MALABAR & COROMANDEL, in the EMPIRE of the GREAT MOGOL. Drawn from the Best Authorities
This copper engraved map locates major towns, rivers and mountain ranges. It extends from the Indus River to Tibet, the Kingdom of Asam in the east, and includes Sri Lanka. Finely engraved with a decorative rococo-style title cartouche. The map details Indian Subcontinent and Sri Lanka (Ceylon) after the ousting of the French by the British in 1761 showing prominent settlements, rivers, and relief of known areas. The former French capital Pondicherry is prominent to the south of Madras. There were four maps in this series., There is no scale bar, and the London is used for the prime meridian; both coordinates and scale were calculated using the map's graticule. 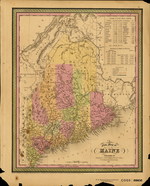 A New Map of MAINE
Includes a list of Counties and Towns of Maine with their populations along with a table of the state population from 1765-1850., Washington, DC is used as the prime meridian. Bottom left, outside the neat lines: "Entered according to act of Congress, in the year 1850, by Thomas, Cowperthwait & Co. in the Clerk's office of the District court of the Eastern Dictrict of Pennsylvania".

A New and ACCURATE MAP of TURKEY IN EUROPE Drawn from the BEST AUTHORITIES and Engrav'd for the Supplement to the Gent. Mag 1770
Map of Ottoman Empire in 1770 showing the area from the Ionian Sea to the Black Sea and includes Bosnia, Serbia, Macedonia, Greece, Transylvania, and part of Hungary., Map of Turkey, Europe. Prime meridian is based in Ferro. There are two scale bars on the map, one in British Miles, the other in German Miles. Map reads with North facing to the top of the map. 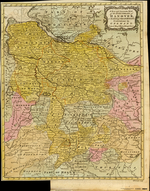 A New and Accurate MAP of the ELECTORATE of HANOVER, of the KING of GREAT BRITAIN's Dominions in GERMANY
A colour washed map of George II's Hanoverean territories during the 7 Years War. Border declination is done through broken lines, and colouring is used for different territories; the orange lines over top the broken ones are used for borders within the King's territory., No scale bar is present on the map, and the map uses London for its prime meridian. The scale and coordinates were calculated using the map's graticule.

A New and Accurate MAP of the KINGDOMS of SPAIN, PORTUGAL, and Part of FRANCE; the Islands of MAJORCA, MINORCA, &c.
A colour washed map of the Iberian Peninsula and surrounding countries and waters engraved by R.W. Seale. A 16 point compass rose with 32 emanating rhumb lines show bearings throughout the Bay of Biscay and to the south of the important British naval base located in Minorca in the Mediterranean obtained after the Treaty of Utrecht in 1713. The colouration of the maps is used to differentiate some political borders, despite the noticeable absence of colour for Spain and the northern coast of Africa; care should be taken not to confuse the island of Minorca or Gibraltar as a German territories. Among the several interesting spellings of place names is Tennis for Tunis. The map title is enclosed within a heavy scroll styled cartouche.

A New and Accurate Map of the EMPIRE of GERMANY, including the Kingdom of PRUSSIA, from the latest and best Discoveries
A map Germany as a major stage of the Seven Years War. Borders are delineated by broken lines and a washed colouring scheme that does not seem to denote political affiliations. Relief and water features are shown along with woodland generalized as individual trees., No scale bar is present on the map, and London is used for the prime meridian. Both the scale and coordinates were calculated using the map's graticule.

A New and Accurate Map of the Isles of GUADALOUPE, MARIE-GALANTE &c. from the Best Authorities
Map of Guadeloupe Island showing adjacent islands of Marie-Galante, Da Destrade, and The Saints. Channels are marked as are three rhumb or loxodrome lines., Map of Guadeloupe Island, located in the Caribbean. Prime Meridian is based in London. Map reads with North facing to the top of the map. Rumb lines throughout the map.

A New and Accurate Map of the South-east Part of GERMANY containing the CIRCLES of AUSTRIA and BAVARIA, Part of BOHEMIA, and the Marquisate of MORAVIA; showing the present State of the War between the Prussian & Austrians
London is used as the prime meridian. In the absence of a scale bar, the scale was calculated using the distance between lines of latitude.