A MAP of the most INHABITED part of VIRGINIA containing the whole PROVINCE of MARYLAND with Part of PENSILVANIA, NEW JERSEY AND NORTH CAROLINA
This is the first map to accurately depict the Blue Ridge Mountains and the first to lay down the colonial road system of Virginia. A great number of plantations are located and include the family names of the Virginia plantation owners of the period. The cartouche, showing a tobacco warehouse and wharf, is one of the earliest printed images of the Virginia tobacco trade. The original survey was conducted in 1750 and published in 1751. It was updated in 1755 to incorporate information from the journals of John Dalrymple and Christopher Gist., Both London and Currituk Inlet are given as meridians. This is the only map we've come across with such an obscure place for a meridian. State borders between Virginia and North Carolina are outlined in color. A MAP of the several Countries thro' which the Russians are to pass in their March to PRUSSIA
Map of coastlines around the Baltic Sea including Russia, Lithuania, Poland, Germany, and Sweden. Some small etchings of tress is present as are dotted lines indicating the march pathway taken by the Russians on their way to Prussia., Map of the Baltic Sea. Prime Meridian is based in Tenerife. There is one scale bar in the bottom right hand corner of the map, in English Miles. Map reads with north facing to the top of the map.

A MAP shewing the communication of the Lakes and the Rivers between Lake Superior and Slave Lake in North America
Relief shown by hachures. The map shows a river connection between Slave Lake and the Pacific through Cook's River. This was a theory expounded by Pond. With first two pages of text, pp 197, 198, from Gentleman's Magazine, titled: "Description of the Country from Lake Superior to Cook's River. Extract of a Letter from someone of Quebec, to a Friend in London. This intriguing map is based on the map and report by Peter Pond in 1787. The map traces the route from Lake Superior to Lake Winnipeg and then through an interconnected chain of lakes and rivers to Arabaska Lake and Slave Lake. The most interesting feature is the speculative river flowing out of Slave Lake, over "falls said to be the largest in the known world," and emptying into Cook Inlet in Alaska, a remarkable journey considering the topography. Pond's map influenced Alexander Mackenzie's quest to find the Northwest Passage in his famous expedition in the region., A map displaying major Canadian waterways from the area around Nipigon, Ontario, to Cook Inlet, Alaska. Of note are the many differing names for lakes and rivers throughout the map. The falls west of Slave Lake (presently Great Slave Lake) are likely Virginia Falls, NWT. The inaccuracy of the mapping of the western and northern areas of the map make accurate georeferencing impossible without higher order transformations/local rubber sheeting. Longitude is taken from the London Meridian

A Map OF THE PROVINCES OF NEW BRUNSWICK, and NOVA SCOTIA, Describing All the New Settlements Townships &c. Including also the ISLANDS OF CAPE BRETON AND PRINCE EDWARD
This is the oldest folded travel or pocket map in the collection and is linen backed. It shows county and township boundaries and is interesting from that point of view.

A Map Shewing the Situation of the FRENCH & ALLIED ARMIES in GERMANY, and to illustrate their late Engagements
Map depicting routes of French and Allied armies in Germany during engagements by dash lines., A map of Germany. Prime Meridian is unknown due to lack of information and graticule. Scale bar in English Miles. Map was referenced with data acquired from USGS's Earth Explorer. 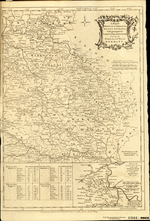 A Map of BOHEMIA, MORAVIA, SILESIA, LUSSATIA, with great part of SAXONY & BRANDENBURG, Shewing the Present seat of War, in GERMANY
Elaborate cartouche decorated with tree foliage. Distance key located at bottom left inset with plan depicting advancement of the Prussian Army over the Austrians. Three scale bars on plan. The uppermost map noting figures on road in German miles. Map details roads and regions., Map of Germany and other surrounding countries. Map reads with North facing just slightly to the top left of the map. Maps coordinates were performed with Graticule math. There are two Prime Meridians, The top is based out of London, the bottom meridian is based from Ferro. There is an inset map of North Germany. Although the inset map and the legend exceed the bottom of the map, the graticule surrounds it all, thus for making the extent of the map the full encloser, including the inset map and legend.

A Map of Part of BRANDENBURG, including BERLIN, and the Country Pillaged by the Russians
Map is detail of the area from Temlin in the Upper Marck to the north, south to Iuterbock, and East to Land Sternberg and New Marck. Named cities include: Drossen, Sonneburg, and Lippen., A map of Germany. Prime Meridian is unknown due to lack of information and graticule. One scale bar, represented in Common Leagues. Map reads with South facing to the top of the map. Most of the city's names on the map have been changed or altered.

A Map of UPPER SAXONY Comprehending that Part of GERMANY which is the Present Seat of War
Map of Germany and Poland, including the cities of Breslaw (Breslau or Wroclaw), Trebnitz (Trzebnica) and Gnesna (Gniezno). Berlin is located at center of map and all surrounding regions are indicated., Map of Upper Saxony, Located in North Germany. Prime Meridian is London. Two scale bars on the map, one in English Miles, the other in German Miles. 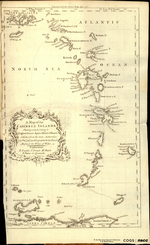 A Map of the CARIBBEE ISLANDS, Shewing which belong to England, France, Spain, Dutch & Danes, Collected from the best Authorities
Decorative cartouche. Extends from the Virgin Islands south to Trinidad, including Barbados. Shows cities, capes, harbors, bays and shoals, but has no topographical detail within islands., Map of the Caribbean Islands, Prime Meridian is London. Map reads with North facing to the top. 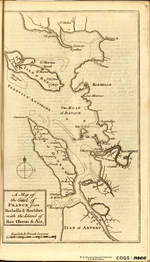 A Map of the Coast of FRANCE from Rochelle & Rochfort with the Island of Ree Oleron & Aix
Very simple map of the French coast between Rochelle and Rochfort. No topography nor town detailed., Map of the coast of France. Prime Meridian is unknown, due to lack of information and graticule on the map. There is one scale bar on the map, represented in English & French Leagues.

A Map of the ICY SEA in which the several Communications with the Land Waters and other new Discoveries are exhibited
Circular map polar projection showing the "icy great North Sea" south to mid Asia and America along the Northwest Coast of America, Northeast Coast of Asia and Arctic Circle. A route from Japan to Portugal is shown around the apocryphal island of Jeso or Yesso. Map shows version of the mythical Sea of the West connecting via dotted lines to Hudson's Bay. Map shows no land masses near the poles., A map of the North Pole. Circular map, no corner coordinates recorded. Prime Meridian is Paris. 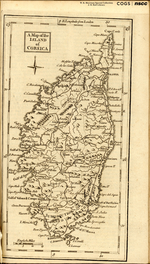 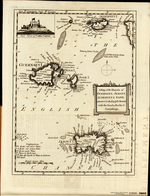 A Map of the Islands of GUERNSEY, JERSEY, ALDERNEY & SARK, situated in the English Channel, with the Sands, Rocks & Soundings
Hand drawn East View of Castle Cornet, Guernsey, from the East in the upper left corner. Ornate cartouche. Explanation legend at bottom left detailing places of anchorage, rocks above and at low water, etc. Copper engraved map of the Channel islands, with a small inset view "East View of Castle Cornet" at the upper left corner. Royce sc at the lower right., Graticule primarily in minutes with no degree written to act as reference for measuring latitude; each minute is further subdivided into units of 10 ; longitude is calculated from the London Meridian. Coordinates calculated from map graticule.

A Map of the ROAD from LONDON to BERWICK, commencing at YORK [on plate with] From Ferribridge, to Boroughbridge [on plate with] From YORK to Scarborough, the distances from London
Strip maps of road detailing city blocks, buildings, and crossroads from London to Berwick starting at Scarborough Eleven strip maps plus one plan of the town of Berwick.., Road maps of various roads in United Kingdom. Prime Meridian is unknown due to lack of information and graticule, There is no scale referenced on any of the maps. There are three maps on this one map sheet. North is orientated differently for each map. There are 3 different roads maps on this particular map sheet.

A Map of the ROAD from LONDON to CHESTER measur'd from the ROYAL EXCHANGE
Strip maps of road from London to Chester. Detailes of city blocks, buildings, and crossroads. Ten strips included on one sheet: Middlesex, Hartford Shire, Northhampon Shire, Warwick Shire, Stafford Shire, Chesire, Shrop, Stafford Shire, and Cheshire., Road map from London to Chester. Prime Meridian is unknown due to lack of information and graticule. Map reads with North facing to the top left corner of the map. Scale was determined by measuring from Highgate to Dunchurch.