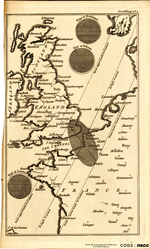 [Great Britain & France, Eclipse Path]
Map detailing the path of lunar eclipse in France and England. No landmarks are noted but several cities are indicated. Other countries noted are: Norway, Scotland, and Ireland. Shaded areas indicate radius of lunar eclipse., Map of the UK. Prime Meridian is unknown due to lack of graticule and information. There is no scale bar on the map, scale was determined by measuring the Length of England. Map reads with North facing to the top of the map.

[ISLE OF SABLE]
The work of J. F. W. DesBarres, especially the "Atlantic Neptune", was a significant part of Walter's research and interest. The Collection includes 59 charts, views and elevations from the 4 volume set, most from the Sea Coast of Nova Scotia volume., Scale bars in statute and nautical miles. 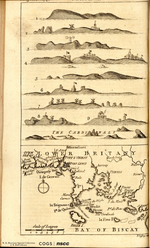 [Lower Brittany, Bay of Biscay]
There are coastal views included for several points of interest., Prime Meridian is unknown due to lack of information and graticule. There is one scale bar on the map, represented in leagues. 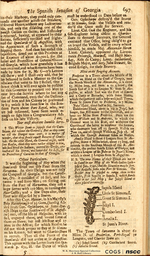 [North America, Georgia, Sea Islands]
This map is small inset map on a page from the Gentleman's Magazine and is an addendum to An Accurate Map of the West Indies from the 1740 volume., Map of Sapola Island and other small islands off the coast of Georgia and Florida, U.S. Today they are referred to collectively as the Sea Islands.

[North America, Louisiana, Virginia & Carolina]
Untitled map detailing land features of Lousiana, Virginia, Carolina, Georgia, and Florida. Of note: also indicated are several lands of the Indigenous peoples - Country of the Kanoatinos, Ceuis, Pavis, Padoucas, Ougawas, Sious, and Caomtas Nation. Map extends to the Gulf of Mexico in the south to Lake Huron and Lake Michigan in the north. Niagara Fall is noted between Lake Erie and Lake Ontario., Map of the Majority of the East coast of America. Prime Meridian is London. There is one scale bar on the map, represented in British Miles. Map reads with North facing to the top of the map. Found that the Southern Features on the map, such as Florida and Lousianna, ect. are a little distorted. 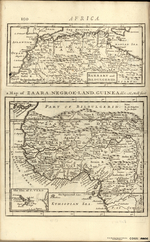 a Map of ZAARA NEGROE-LAND GUINEA &c. [on sheet with] BARBARY and BILDULGERID
The top map is of the northern Africa area of Barbary and Bildulgerid. The bottom map is of western Africa, covering the Sahara Desert and Guinea, with an inset map of the isles of Cape Verde., Map scales for the top and inset maps are in Degrees; no map scale is provided for the main map. The map uses the Ferro Meridian.

title
A perspective view of Gibraltar during the Great Siege, with several plan-like depictions of the opposing works and showing the Spanish attack that took place on April 12th, 1781, and made to accompany an engraving of the head of George Augustus Eliott, 1st Baron Heathfield, who was governor of the territory at the time. The view is of Gibraltar during the American War of Independence. On 12 April 1779, France and Spain signed the Treaty of Aranjuez, agreeing to aid one another in recovering lost territory from Britain. The view depicts numbered tents, horses, many battleships, the fort and fortifications, soldiers on foot and mounted, the occasional dog, cannons firing complete with trajectory of attack., Coordinates refer to center point to which the image is referenced in right-reading.