THE SPANISH NETHER LANDS
Map scale is not provided and uses Ferro Meridian.

TURKEY in EUROPE, from the best AUTHORITIES
A map of Turkey and some other portions of the Ottoman Empire's vast territory at the time. The continental boundary is marked by a broken line running through the Bosphorus. The Danube is marked as a single line with a heavy weight, and the Carpathians and other mountain ranges are shown by light hatching. Non European Turkey, and territories not directly controlled or acting as vassals to the Ottomans are ghosted out. Shows that part of the Balkan Peninsula occupied by the Ottoman Turkish invaders. Relief shown pictorially. Title in ovoid cartouche at lower right., The scale bar is in British miles, and London is used for the prime meridian; the scale was calculated from the scale bar and the coordinates from the map's graticule.

TURKY in ASIA
The map scale is in degrees and uses Ferro Meridian.

TURKY in EUROPE
Includes a legend representing locations and names of the smaller Greek islands with a corresponding number. The map scale in English Miles and uses Ferro Meridian.

The Austrian & French NETHERLANDS agreeable to the Barrier concluded at Antwerp, and relative to the present War
Prime Meridian is London. Scale bar represented in English Miles. 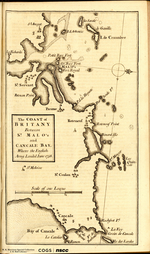 The COAST of BRITANY Between St MALO's and CANCALE BAY, Where the English Army Landed June 1758
Map of the Britany Coast beteen St. Malo's and Canale Bay indicating where the English Army landed in 1758 showing villages during the period of the Seven Years' War. Variant spelling "Britany"., The coast of Britany, Located on the North West Coast of France. This map reads with North facing to the right of the map. The Prime Meridian is unknown due to lack of information and graticule. There is one scale bar on the map, represented in Leagues. 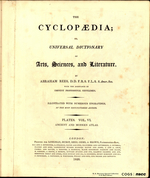 The CYCLOPӔDIA; OR, UNIVERSAL DICTIONARY OF Arts, Sciences, and Literature: PLATES, VOL. VI, ANCIENT AND MODERN ATLAS
There were 39 volumes, plus 6 volumes of plates, to the Cyclopӕdia published as a set in 1819 and 1820, although it began as a serial in 1802. An index to the plates in the Atlas was included in volume 39. The 'modern' maps are distinctive as early examples where topographic relief is shown pictorially. 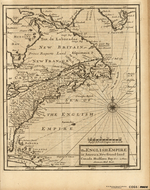 The GEOGRAPHY of the Great Solar Eclipse of July, 14. MDCCXLVIII. EXHIBITING an accurate Map of all parts of the Earth in which it will be Visible with the NORTH POLE according to the latest Discoveries. By G. Smith Esqr.
A predictive map exhibiting parts of Northern Europe and North Pole visible during Lunar eclipse showing 24 diagrams of various views of the eclipse from different towns and cities around the world. Each diagram indicates sighting location and degree of eclipse. Elaborate cartouche resplendid with cherub blowing stardust, Note: Lake Michigan is labeled as "Illinois Lake" and Lake Superior is labeled "Upper Lake"., There is a a scale bar in the bottom right corner of the map, but unsure of the measuring units. There is a pictures exhibiting the moon through an eclipse. Graticule math was performed and compared with coordinates on Google Earth to determine the map extent. Prime Meridian is Ferro.

The Isle of CALIFORNIA, New MEXICO, LOUSIANE, The River MISISIPI, and the Lake's of CANADA
Map of the North American central and Midwest regions. Like many maps at this time, California is presented as an island. In this case, it is very exaggerated. By the 1730's it is either corrected, or much smaller than this map depicts., The map scale is not provided and uses Ferro Meridian.

The Port of CALLAO, in the SOUTH SEA; with the Adjacent Islands, Rocks & Coasts, to the Windward and Leeward, and the Soundings in Fathoms: Drawn by Order of HIS CATHOLIC MAJESTY
The coast of Peru from the Port of China to Tomocaya Point showing Callao near Limea and the Island of St. Lorenzo. Sea depth shown numerically in Spanish fathoms. Cartouche is elaborately detailed with etching of multi-sailed schooner, vegetation, and sepulcher., Map is of Callo Port, Located on the North West Coast of South America. Map has two scale bars on it, represented in Toise, the other in Spanish Fathoms. The map reads with North facing to the left of the Map.

The Principal Islands of the EAST INDIES
The map scale in Degrees and it uses the Ferro Meridian.

The ROAD from LONDON to CAMBRIDGE, ELY & KINGS LYNN / From OXFORD to CAMBRIDGE passing thro BUCKINGHAM & BEDFORD / ELY to BURY
Strip maps of roadway detailing city blocks, buildings, and crossroads from London to Cambridge, Ely, and Kings Lynn; from oxford to Cambridge; from Ely to Bury.Ten strip maps on one sheet. Buildings within cities and along the road are etched and several shires are noted., Map sheet consisting of three individual road maps, all found in the United Kingdom. Prime Meridian is unknown due to lack of information and graticuel. Each map is orientated with North facing a different way. Scale was determined by measuring the length of the roads.

The ROAD from LONDON to FLAMBOROUGH HEAD, passing thro PETERBOROUGH, LINCOLN &c. commencing at Stilton in the YORK ROAD [on plate with] From LONDON to BOSTON commencing at Pekirk Column I [on plate with] From LINCOLN to BOSTON, see ye bottom
Strip maps of road detailing city blocks, buildings, and crossroads from London to Peterborough, Boston, and Lincoln. Eleven strip maps I plus plan of Yorkshire., Various Road maps located in the United Kingdom. There are four road maps on this one map sheet. All maps have North pointing in different directions. Scale was determined by measuring the distance of the roads. Prime Meridian is unknown due to lack of information and graticule.