SURREY, drawn from late SURVEYS by R. W. Seale
A map of the county of Surrey by Seale using an alphabetized legend for the ancient system of hundreds. More roads are shown at a larger scale on this map compared to Bowen's work, including a rendering of the coat of arms of the county's principal settlement, but otherwise many of the conventions stay the same with the addition of gentleman's seats and how many members of parliament are sent by the county. A keyed Explanation is located in the bottom right corner. An elaborate and detailed Arms of Guilford is placed at top of map. The arms is framed by an elaborate cartouche. The arms include a depiction of a large crenellation castle complete with drawn gate, two emblems, and a lion. Landscapes are pictorially presented to include town buildings, parks, cartways and pathways., The scale bar is in English miles, and London is used for the prime meridian. The scale and coordinates were calculated using the map's scale bar and graticule.

SUSSEX, Drawn from an Actual SURVEY by R. W. Seale
A map of the county of Sussex, divided into the six rapes and noted by an alpha-key at top center of map. A rape is a traditional territorial sub-division of the county of Sussex in England, formerly used for various administrative purposes. An explanatory legend sits below the mainlaind noting towns, parish churches, castles, roads, water mills, and parks with accompanying pictorial etchings. The arms of Chichester in the top right depicting a crenelation battlement and royal robes. The Cartouche around the crest is both scroll motif and tall vegetation such as cattails and bullrushes. A scroll motif cartouche frames the work's title, mark of responsibility, and publishing details. Details concerning parliamentary representation are shown., The scale bar is in English miles, and the graticule uses London for its prime meridian; the scale was calculated from the the scale bar and the coordinates from the map's graticule.

SWEDEN and NORWAY
The accompanying legend represents locations with a corresponding letter. The map scale is not provided and uses a meridian ~20° W of Greenwich, may either be an unknown meridian or a poorly depicted Ferro Meridian. Coordinates were obtained via georeferencing. 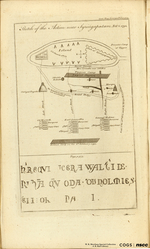 Sketch of the Action near Syringapatam, Feb'y 6, 1792
A sketch displaying British troop movement during the Battle of Seringapatam in 1792, the siege of modern day Srirangapatna oriented with South at the top. It was during this battle that Tipu Sultan was killed. Sketch depicts British encampments, Tippoo's camp, trenches, and lines of attack are indicated by dotted lines., As there are no coordinates or scale displayed, each are derived as rough estimates via georeferencing.

TABULA APHRICAE I
This map appears in another example of the several translations of Ptolemy's Geography. This one, in Latin, was a translation directly from the Greek done by Pirckheimer and revised by Giuseppe Moleti. Stevens (pg. 51) notes that the maps in this version are identical to the maps in the Italian 1561 edition, also published by Vincenzo Valgrisi. Includes the verso and the original sellers information.

TABULA APHRICAE II
This map appears in another example of the several translations of Ptolemy's Geography. This one, in Latin, was a translation directly from the Greek done by Pirckheimer and revised by Giuseppe Moleti. Stevens (pg. 51) notes that the maps in this version are identical to the maps in the Italian 1561 edition, also published by Vincenzo Valgrisi.

THE BRITISH CHANNEL including the COASTS of ENGLAND and FRANCE
A map depicting navigation details including fathoms and distances of the channel between Brittany and the coast of Britian. A.compass rose sits at the widest part of the channel; isobaths are used instead of soundings to display depth; rocks, sandbanks, and other marine hazrads are symbolized. Lizard Point is boldly labeled as a common point of departure. The lower portion of the map shows a detailed cross-section profile of the channel and cliffs complete with depth in fathoms and distances by degrees, titled: Section of the Channel and Part of the German Ocean from the Isles of Scilly to Orford Ness., The scale bar spans the full North-South extent of the map, and is in British and French leagues and London is used for the prime meridian; the scale was calculated from the scale bar and the coordinates from the map's graticule.

THE BRITISH COLONIES in NORTH AMERICA from the best AUTHORITIES
The map includes numerous notations giving the reader some historical and environmental context. Examples of these are: "The climate of this land is a great deal more temperate than Hudsons Bay" for an area in western Ontario north of the Lake of the Woods and "Christian Sea discovered by Jn Monk in 1619" on Baffin Bay.

THE BRITISH GOVERNMENTS in N'TH AMERICA Laid down agreeable to the PROCLAMATION of Oct. 7. 1763
Important map illustrating the new boundaries established at the end of the French and Indian War with England taking possession of the former French and Spanish Settlements in Canada and Florida. Map extends from the east coast of Newfoundland to East and West Florida, the Bahamas, and inland including the Great Lakes and French Louisiana. NOTE: boundary line indicating the limits of the Hudson's Bay Company, an etching of the fishing banks off Nova Scotia, and a large "Lands Reserved for the Indians" west of the Appalachians. Florida is divided into West and East indicating a territorial dispute with Spain from the ambiguities of the Louisiana Purchase. An inset map depicts Bermuda or Summer Islands. The King's Proclamation is published on page opposite this map in the Gentleman's Quarterly., Map of the East coast of North America, with an inset map of Bermuda Island. Prime Meridian is based in Ferro. Each map has it's own scale bar, both in Miles. Main map has Stateline's shown for the majority of the Eastern States. Main map reads with North Pointing North West.

THE EAST INDIES DRAWN from the Latest Discoveries
Detailed map of region extending from India to Japan and south to New Guinea. Ornate cartouche of palm trees and island inhabitant. Of note: dotted lines indicated sea track of several galleons. Sea tracks include: track to Acapulco, from China to Europe, to Manila, from South Sea to China. Map details sholas, islands, and coastlines., Map of the East Indies. Map reads with North facing to the top of the map. Prime Meridian is London. Scale was determined by measuring between 10 degrees of Latitude. 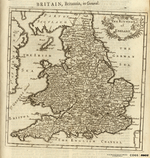 THE KINGDOM OF ENGLAND
Map scale is not provided. Uses the London Meridian

THE KINGDOM of NAPLES and SICILY Drawn from the most approved foreign MAPS and CHARTS
A map showing the Kingdom of Naples and Sicily. In 1783 was the Calabrian earthquakes/ and Tsunamis occurred in early February, and the death of Prince Giuseppe due to smallpox. Light relief is shown with hatching, and there is small coastal shading. The Kingdom of Naples was a major political entity in the southern Italian peninsula from 1282 until 1808. In 1816 it was joined with Sicily to form the Kingdom of the Two Sicilies, and in 1861 it was annexed to form the Kingdom of Italy. Roads are shown, and border delineation is done through broken lines., The scale bar is in equivalent Italian & English miles, and London is used for the prime meridian; the scale was calculated from the scale bar and the coordinates from the map's graticule. 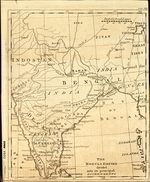 THE MOGULS EMPIRE divided into its principal GOVERNMENTS
Map includes India, Bangladesh, and area of China such as Great Tibet and the Ganges River. Several islands are depicted including Andaman and Nicobar. Regions named: Ceylon, Indostan, Bengal, Ganges, Tibet, Pitan, and the cities of Angra, Delly, Lahor, Dacca, and Hydrabad., Map of India. Prime meridian is determined to be Ferro. There is one scale bar on the map, represented in Leagues. Scale was determined by measuring between 5 degrees of longitude. Map reads with North facing to the top of the map.

THE NORTH-WEST COAST of ENGLAND from WALNEY ISLAND to ST. BEES HEAD; surveyed and navigated by M. Mackenzie, Sen'r
Includes two views: "A View of the Hills in Cumberland" and the other "A View of the Island of Man"., Map of the north-west coast of England, with counties outlined in color and settlements colored in red houses. Mountains and forests are depicted pictorially and shallow waters are stippled. Water depths are also marked, accompanying tidal flow direction indicated by arrows. Hillside profiles are provided for navigational uses. Map orientation for north is towards the left in reading position and scale is in English Miles.