Plan of EMDEN
Two maps of the City of Emden, Located in German, on the German Ocean. The top map is a plan layout of the city. The Bottom Map (B) is a layout of the Harbour into Emden., The prime meridian is unknown due to lack of information and graticule on the map. Both maps read with North facing to the top of the map. There are two scale bars on the second map, one in German miles, the other in English miles. Both maps were referenced with data acquired from USGS's Earth Explorer. 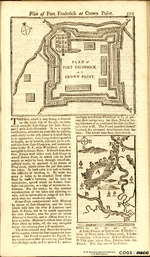 Plan of Fort Frederick at Crown Point
Plan and description of fortifications by the French serving as a buffer between the British position at Lake George and the other forts. Plan at top of page details the fort and map on lower part of page is keyed referencing lakes, rivers, and creek as well as the location General Johnson defeated the French. The dotted line represents the route of the French., Map of Fort Frederick, located at the Northern Tip of Lake George, Crown Point, Vermont. Map reads with North facing to the top left corner of the map. Prime meridian is unknown due to lack of information and graticule on the map. Scale was determined by measuring from the bottom left corner of the fort to the top right corner of the fort. Bottom Map is a poor representation of Lake George to the Southern tip of Lake Champlain.

Plan of the BATTLE of THORNHAUSEN from the Original Published at Hanover by Order of the REGENCY
Map depicts army line positions and direction of advancement at Thornhausen, on the plain of Minden, Westphalia during the Seven Years War, August 1, 1759, where the Allied army commanded by Prince Ferdinand-Brunkswick-Wolfenbuttle was victorious over the French Army., A map of the Battle of Thornhausen, In Germany (Severn Years War 1756 to 1763) Prime meridian is unknown due to lack of information and graticule. The map reads with North facing to the left of the map. Scale was determined by measuring between Minden and Petershagen.

Plan of the City & Harbour of LOUISBURG; shewing that part of the GABARUS BAY in which the English landed, also their Encampment during the Siege in 1745
Inset: A Map of the Island of Cape Breton., The Scale is in English miles. Interestingly there is a graticule for the inset, but not the map itself. The coloring is modern and not contemporary to the publication of the map. The inset uses London as the prime meridian. 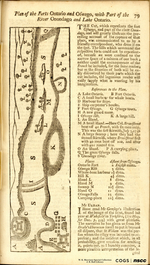 Plan of the Forts Ontario and Oswego, with Part of the River Onondago and Lake Ontario
Details of the Fort of Oswego, New York State at time of a siege lasting 2 years. The account takes over 6 pages of this journal. Accompanying text explains alpha reference indicated on plan including: Lake Ontario, Small harbour for whale boats, new guard room, swamp, islands, falls, rivers, and falls., Map of Oswego, located in Upper New York State. Prime Meridian is unknown, due to lack of information and graticule. There is a a legend with significant points of interest throughout the map. The most notable features on the map are the Forts.

Plan of the Intended NAVIGABLE CANAL from MOOR FIELDS into the RIVER LEE at WALTHAM ABBY Surveyd by Order of the City of London, By Rob't Whitworth
Plan details include lot borders, roadways, and existing buildings. Locks operational at the time are indicated along canal. Survey by Rob Whitworth. Large scale plan of a proposed navigable canal from London Bridge spanning the Thames north until the River Lee at Waltham Abbey oriented with west at the top. Instead of a graticule, this map uses a border with major divisions in miles and minor divisions in furlongs. Locks, half locks, and cuts are annotated along the proposed system, along with major roads, boroughs, and natural features., The scale was calculated from the map's scale bar, while the coordinates were derived via georeferencing, primarily to Kingsland Rd. A good candidate for rubbersheeting. 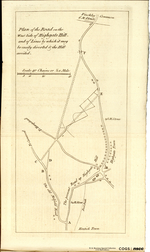 Plan of the Road on the West Side of Highgate Hill, and of Lines by which it may be easily diverted & the Hill avoided
A map of proposed alternate routes to avoid traversing the large hill in the area to reduce the traffic congestion and injuries on the road. Sparse pictorial depictions of buildings. Accompanying text details Alpha referencing on map., Map oriented with N by E at the top.

Port de Halifax de la Nouvelle Ecosse avec les Recifs, Dangers, Bas fonds et Sondes
Land features are almost completely devoid of topography or relief; coastline augmented with hachures. Depth is shown by soundings. Handwritten on verso: "Map No. 9 from: Pilote Américain Septentrionale pour Les Côtes de Labrador, Nlle Ecosse, Nlle Angleterre, New York, Pensylvanie, Maryland, Virginia, Les I. Caroline et Floride . . .A Paris Chez Le Rouge 1778. Stevenson & Stile . Cat . New Series No. 23 (40A).", West is "up" when in reading position. The graphic scale bar unit of measure is miles, the representative fraction scale is calculated by measuring scale bar increments. While the grid aligns with magnetic north it does not indicate lines of longitude and latitude and direction of lines of longitude is indicated by arrows extending from rhumb line centroids, labelled "Meridien". No geographic coordinates are displayed and there is no graticule or indication, as such, of a prime meridian; the map was meant to be used to navigate an entrance channel into Halifax harbour, after having located the mouth of the harbour with the use of other smaller scale charts. Rhumb line bearings, soundings, landmarks, and shallow water hazards, all displayed graphically, serve as navigational guides. The presence of rhumb lines and a right-angled graticule indicates a conformal projection, likely Mercator's, which preserves shape and direction, for the purpose of navigation (cylindrical). 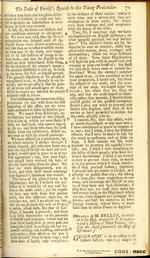 REMARKS by M. Bellin, in relation to his Maps drawn for P. CHARLEVOIX'S History of New France, &c.
This article was written to accompany Bellin's map, engraved by Thomas Jefferys published in the January issue. The original map was published in Charlevoix's "Histoire et description générale de la Nouvelle France". 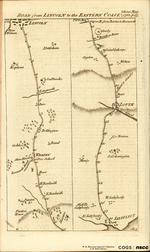 ROAD from LINCOLN to the EASTERN COAST
Map showing the old road from Lincoln to Saltfleet. The road has numerical markers for every mile, and Gentleman's Seats that are along the way are annotated for travelers. A letter accompanies the map with descriptions on adjacent page., Two sections oriented with SWS on top. The coordinates were obtained via georeferencing.

RUSSIA DIVIDED into its GOVERNMENTS
There are three scale bars; two are different Russian Versts, great versts and common versts and the third British miles. Ferro (El Hierro) is the prime meridian.

RUTLAND SHIRE Drawn from the best Authorities. By Eman: Bowen Geog'r to His Majesty
A map of Rutlandshire (present day Rutland), the smallest of England's historic counties, for Hinton's Universal Magazine. In comparison to some of the other maps in the series, settlements are represented by vignettes or generalized city plans. The coat of arms of Okeham is located in the bottom left corner depicting a turned-down horseshoe. The map title and responsibility are presented as a monument, and surrounded by thematically agrarian features for an idealized view of the landlocked county., Only minutes are given for longitude, but accurately describes the graticule as west from London as it does lie between -1° and 0°. Roman Encampments at CHILHAM in Kent; Telegraph, &c.
The accompanying text indicated that fig. 1 on the sheet represents the summer encampment for the Romans on their second invasion. The etching of a windmill and filtration system is enclosed on two acres surrounded by a trench. Figure 2 sketches a 12 acre parcel worked into trenches. Figure 3 on the sheet details the telegraph building. A letter written by Z. Cozens, who also etched the plans, details why the trenches were built, the conflict, and workings of the telegraph. He writes that on a clear day a message can be sent using the shutters a distance of 72 miles with a return message in 7 1/2 minutes., Figure 1 is believed to be located atop the large hill in Shottenden at 0.9274, 51.2555 dd, just north of the village with the same name, and is oriented with SSW at the top. Coordinates and scale estimated via georeferencing. Figure 2 is impossible to georeference to a reasonable degree of certainty, but according to the text it is located approximately 2 miles southeast of Figure 1 around 1.0081, 51.2246 dd. There is evidence of embankments in the area, but any attempt at locating the exact area would be a guess without ground truthing. SAVOY and PIEDMONT
Map scales include: German Miles; French Miles; and English Miles. The map uses a meridian ~20° W of Greenwich, which may either be an unknown meridian or a poorly depicted Ferro Meridian.

SCANDINAVIA or the Kingdoms of DENMARK, SUEDEN, NORWAY & LAPLAND
Map scale is not provided and uses Ferro Meridian.