A MAP of the Island of DOMINICA, taken from an actual Survey: Also Part of Martinico & Guadalupe shewing their true bearing & distance from each other, By Tho's Bowen
An pictorial map of Dominica Island in the Caribbean Sea, and parts of modern day Martinique and Guadeloupe with two compass roses showing rhumb lines. Elaborate scroll cartouche., Coordinates and scale calculated from map graticule and scale bar.

A MAP of the Island of ST. JOHN In the GULF of ST. LAURENCE Divided Into Counties & Parishes And the LOTS , as granted by Government, to which are added The Soundings round the Coast & Harbours, Improv'd from the late Survey of Captain Holland
Copper plate engraving with original outline colour, with insets of the Gulf of St. Laurence and a "List of Lots and Proprietors Names". The map provides a finely detailed treatment of the island and environs, including a list of 67 lots and the proprietors of each lot, including Samuel Holland himself (Lot 28). Many other important early names are included in the list, including Guy Carleton (then provincial Governor of Canada)., Prime meridian is unknown, but it is a nautical chart. North is indicated as North/West on the map.

A MAP of the KINGDOM of PORTUGAL
Map detailing territories and regions of Portugal in 1962. Of note: Atlantic or Western Ocean and Extramaduras Leon, Bay of Cadiz, and part of Spain are detailed., Map of Portugal. Prime Meridian is based in London. Map reads with North facing to the top of the map. There is one scale bar on the map, represented in British Miles

A MAP of the MOUTHS of the GANGES in the BAY of BENGAL shewing the English Settlements lately Destroy'd by the Nabob of that Province
Shows not only the English settlements along the Ganges including Calcutta but also those of other Europeans – Shinshura (Shinsura) established by the Dutch and Shandernagor (Chandernagore) by the French etc. The Nabob referred to is Siraj ud-Daulah (1733 -1757), the last Nawab of Bengal before the province’s incorporation by the East India Company. The accompanying text in the Gentleman's Magazine gives a detailed account of the areas development., A map of the North Coast of the Bay of Bengal, located on the East coast of India. Prime Meridian is London. There are two scale bars on the map, one in English Miles, the other in English/French Leagues. 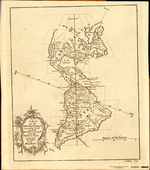 A MAP of the NEW CONTINENT according to its greatest diametrical Length from the River la Plata to beyond the Lake of the Assiniboils
Map of North & South America, the Prime Meridian is unknown due to lack of information and graticule on the map. There is one scale bar in the bottom right corner, represented in degrees. North is facing the top right hand corner of the map.

A MAP of the NEW ROADS &c. from WESTMINSTER BRIDGE
Map shows London Bridge, The Tower of London and Westminster, Kennington Common, Vauxhall Bridge, and Grange Road. Plan shows new road laid out across Lambeth and Southwark. Proposed roads are raised against flood as Lambeth is mostly marshland., Map of Lambeth area of London, United Kingdom. Prime Meridian is unknown due to lack of graticule. Scale was determined by measuring from the South of the London Bridge to the South of the Westminster bridge. Map reads with North facing to the bottom of the map.

A MAP of the New GOVERNMENTS, of EAST & WEST FLORIDA
Map of Florida after acquisition from Spain by Great Britain at end of French and Indian War divided into two Governments. Shows Indian villages, Fort Mobile, "la Balise Ft., Pensacola," "Old Town," and "New Town," rivers and inlets, anchorages, and soundings. Map shows the Florida peninsula as an archipelago. Left lower corner inset "Plan of the Harbour and Settlement of Pensacola" then the capital of West Florida., Map of Florida with a key map of Pensacola Harbour, located on the North coast of the Gulf of Mexico. The Prime Meridian for the main map is London. Each map has it's own Scale bar, represented in British Miles. Both maps read with North facing to the top of the Map. The inset map is a little distorted.

A MAP of the RHINE between WESEL & DUSELDORP Shewing the Country round Crevelt where the Battle was fought between the Allied & French Armies June 23 1758
Map shows where the battle between the Allied and French armies was fought on June 23, 1758 along the Rhine River., Map of the Rhine river, located in central Germany. The Prime Meridian is London. One scale bar in English Miles. The map reads with North facing to the top of the map. Map was georeferenced with data acquired from USGS's Earth Explorer.

A MAP of the ROAD and COUNTY round TOULON
A plan of the port of Toulon, France, and surrounding land and waters post Vauban's build up of its fortifications and the creation of the causeway connecting l'Isle de Sépet to the mainland. The description of a 'camp of 1707' refers to Imperial Army of Sardinia and Savoy's siege of the town during the War of the Spanish Succession which was successfully resisted. The forts and redoubts that played prominent roles during the siege are shown, along with the hilly topography and a quite detailed coastline with sandy beaches omitted. Toulon itself is highly generalized, but the famous Tour Royale built under Louis XII is shown as the 'Great Tower'. The ocean is contrasted to the land through the use of tinting tools or engraver's rakes to create even parallel lines from coastlines to extents., No scale bar or gratiucle are present in the work; the scale and coordinates were obtained via georeferencing.

A MAP of the SEAT of WAR on the RHINE, and parts adjacent, in GERMANY
Map of regions of Germany including Franconia and Thuringia and the Rhine River. The map title includes an etching of a crowned eagle., Map of the greater part of Germany. Prime Meridian is London. There are two scale bars on the map, one in English Miles, the other in Germany Miles. Map reads with North facing to the top of the map.

A MAP of the SOUTH POLE, with the Track of his Majesty's Sloop Resolution in Search of a SOUTHERN CONTINENT
Chart tracing Cook's search for the great southern continent, circling but not reaching Antarctica, with the southern portion of South American, the Cape of Good Hope, and New Zealand shown. Polar stereographic map showing Cook's progress on board the Resolution through the southern hemisphere. Along the vessel track are descriptions of discoveries along the way, including his calculated antipode of London to the SE of New Zealand. This volume includes the Declaration of Independence, published in August 1776., Scale and extentent derived via georeferencing.

A MAP of the STATES of VIRGINIA, NORTH CAROLINA, SOUTH CAROLINA and GEORGIA comprehending the SPANISH PROVINCES of EAST and WEST FLORIDA
It's interesting that a map purporting to show treaty boundaries shows no boundaries between the states, but it's clearly representative of the time the map was made; the very first instance of this map by John Purcell was drawn circa 1788., London is used as the prime meridian. Scale is measured in units of British miles 69 1/2 = 1 degree.

A MAP of the UNITED STATES of AMERICA Agreeable to the Peace of 1783
According to McCorkle (785.4) this map was engraved by William Darton and appeared, unchanged, in Guthrie's "A new system of modern geography" from 1786-1795. No scale bar on map.

A MAP of the WORLD from the best AUTHORITIES
Show the tracks of Capt James Cook's voyages from 1768-1780.

A MAP of the WORLD on Mercators PROJECTION
Map of work showing latest discoveries but pre-dating explorations of Cook. Notes on map include: "Discovered in 1741," noting Russian discoveries. Another note, "Land discovered in 1741," notes an early discovery in the Aleutian Islands. New Holland is partially formed and only the western coastline of New Zealand is delineated. The west coast of North American is labeled New Albion and a note in the Pacific reads "Land discovered in 1741, see Gent. Mag. Vol. 24." The entire eastern coast of Australia is indicated as unknown by a dotted line and Van Diemens Land is still connected to the continent. Only the western coast of New Zealand is shown. Cape Circumcision floats alone in the south Atlantic well below the Cape of Good Hope., Map of the earth, African Central. Map has heavy distortion around Australia, and Northern Canada. Prime Meridian is Ferro. Scale was determined by measuring between latitude.