A MAP of POLAND, with APPENDAGES; shewing the late Partition of that KINGDOM
The First Partition was of the Polish-Lithuanian commonwealth, and only partly of one of its two constituents: the Kingdom of Poland., A map showing the territorial boundaries of Poland of that time, extending deep into present day Ukraine, and encompassing modern Lithuania and Belarus. Coordinates and scale were calculated from the graticule using London as its Prime Meridian, and the map's scale bar which was in nautical miles. Map was georeferenced to the Equidistant Conic projection.

A MAP of POMERANIA and BRANDENBURG with the Frontiers of POLAND
Map of small villages, forest, rivers, lakes and roads of northern Poland and part of Germany including Berlin and Frankfurt on the Oder River., Map of Poland, located North of the Baltic Sea. Prime Meridian is London. Two scale bars on the map: German miles and British miles. Scale was determined by measuring between a degree of latitude.

A MAP of Part of WEST FLORIDA from Pensacola to the Mouth of the Iberville River, with a View to show the proper Spot for a Settlement on the Mississipi
As designated by the 1763 Treaty of Paris the western boundary of West Florida was the Mississippi River. This was later contested by France and Spain and eventually adjusted eastward. The “proper spot for settlement” is the current location of Baton Rouge. The inset plan demarcates lots and building placements., A map of certain areas around the present day Gulf of Mexico and a proposed plan for a new settlement along the banks of the Mississippi as an inset. Coordinates and scale calculated from the maps graticule and scale bar. 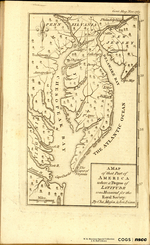 A MAP of that Part of AMERICA where a Degree of LATITUDE was Measured for the Royal Society:
Detailed regional map of Chesapeake and parts of Maryland, Virginia, Delaware, New Jersey, and Pennsylvania. Important results of Mason & Dixon's survey of boundaries following a nearly 100 years dispute between Penn and Calvert families., Map of Delaware area, located on the East coast of the United States. Prime Meridian is unknown due to lack of information and graticule. There is one scale bar on the map, represented in Miles. Map reads with North facing to the top of the map.

A MAP of that Part of WESTPHALIA in which the French Army where Defeated Aug. 1, 1759
Map showing part of Westphalia and other regions: Dutchy, Minden, Electorate, Hanover, Bishopric, Osnabruck, and Munster. Map of region where the French army was defeated in August 1759 during the Seven Years War., Map of Westphalia. Prime Meridian is unknown due to lack of information and graticule. Map reads with North facing to the top of the map. There are two scale bars on the map; British Miles and German Miles.

A MAP of the BRITISH & FRENCH PLANTATIONS in NORTH AMERICA
"This map was intended as the title map for two other maps which when all joined would cover, south to Georgia and the Carolinas, and west to the Great Lakes based on the Mitchell map." (Kershaw 351)

A MAP of the BRITISH AND FRENCH SETTLEMENTS IN NORTH AMERICA
There are several interesting notes on the founding of the various English settlements covered by the map. The accompanying magazine article points out that the purpose of the map is illustrate the "just" claims of Great Britain and the "encroachments" of the French.

A MAP of the BRITISH and FRENCH SETTLEMENTS in NORTH AMERICA
A hand-coloured map of British and French settlements in North America for Hinton's Universal Magazine. The map has unique horizontal colouration not following any specific region: however, the explanation provided in the text on page 145 and following state the colouration distinguishes several provinces. The uncoloured part of the map contains all the territories held by France. The text further explains ceded territories and treaties. The pricked line from Escondido in the Gulf of Mexico through New Hampshire an the Allegany mountains is what the French prescribe as the boundary of English settlements. Dotted lines appear to represent many features including fishing banks, possible borders, possible routes, and other features. The annotation for some forts have white masking. It is difficult to discern where the map states New France to be, although it is possible that it states all of the area west of Québec to belong to the French; South Carolina is split by Georgia; Port Toulouse in Cape Breton is shown before having its name later changed to St. Peter's; territories of various native tribes are written but not delineated; hachuring is used to show some relief, and the Allegheny subset of the Appalachian Mountains is annotated . The cartouche framing the title is exceedingly elaborate depicting a ship with mast and flag, baskets of flowers, many floral objects, a full second ship, many sails in the distance, trees, birds, and an urn. The inset shows a large scale plan of the French fort (Fort Saint-Frédéric) at Crown Point, New York, with a profile view of the tower., London is used for the prime meridian. No scale bar present on the map; the scale and coordinates were calculated using the map's graticule . 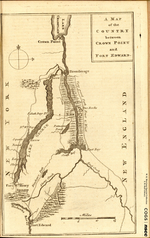 A MAP of the COUNTRY between CROWN POINT and FORT EDWARD
Map of Lake George showing various bays, points, and ponds. At tributaries depicted include Shone Creek, Hudson's River, and East Creek. Walking paths demarcated include Dieskan's Path and others unnamed., Map of Lake George, located in New York State. The Prime meridian is unknown due to lack of information and graticule. There is one scale bar on the map, in Miles. The map reads with North facing to the top of the map. There are swamp lands indicated throughout the map. Map was referenced with data acquired from USGS's Earth Explorer 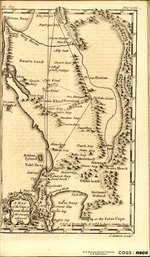 A MAP of the Cape of GOOD HOPE & the Country adjacent
Map of Cape Colony in the mid Eighteenth century. Of note: triangulation for measuring the arc of the meridian at Cape Town. Map illustrates an article on Nicolas-Louis de Lacaille's survey to determine the shape of the earth at the Cape of Good Hope. Interestingly, despite flawless calculations and precise measurements, his results indicated that Earth was pear-shaped, an error caused by failure to take into account the Newtonian gravitational effect of the Cape mountains on the plumb bob., Map of the Cape of Good Hope, Located on the Southern West Coast of Africa, Prime Meridian determined to be Paris. The map has one scale bar, represented in French Toise. There is a triangle on the map, not really sure what it depicts, a line of travel possibly.

A MAP of the Countries Adjacent to CARLISLE shewing the Route of the REBELS with their principal FORDS over ye R'r EDEN
Map of the route of the 2nd Jacobite Rebellion in the area surrounding Carlisle. There is a nice inset of Carlisle Castle in the bottom left corner, as well as a legend on the bottom of the map indicating important locations., The prime meridian is unknown due to lack of information and graticule. There is one scale bar on the map, represented in British Miles.

A MAP of the DISTRICT of MAINE with NEW BRUNSWICK & NOVA SCOTIA
Geo-political boundaries outlined in color. Note the boundary between Maine and New Brunswick is straight. The US-Canada boundary issue would not be completely settled until the mid-1800's.

A MAP of the ISLAND of ORLEANS with the ENVIRONS of QUEBEC
Map shows city and adjacent region including the Island of Orleans. This map was published within a month of the surrender of Quebec., A map of Isle of Orleans, Quebec. Scale bar is English miles. The prime meridian is unknown due to lack of graticule and information. The map reads with North facing to the top right corner of the map and was referenced with data aquired from USGS's Earth Explorer.

A MAP of the ISLAND of TOBAGO, Drawn from an Actual SURVEY, by Tho's Bowen, 1779
Detailed map of the Island of Tobago, showing Divisions (and the size of each Division by acres), towns, harbors, bays, points, islands, rivers and other details. An attractive, small map fully engraved with much detail on the island. The island is partitioned into seven divisions, each identifying the number of acres and estates. Near Rocky Bay is a notation about the location of King Roufsels People, referring to a small group of Amerindians, the remaining indigenous people of Tobago. Soundings and shoals marked in the harbors, and the map is oriented with a nice compass rose., This English map uses London for its prime meridian. It is oriented with North at the top. The scale and coordinates were calculated from the scale bar and map graticule.