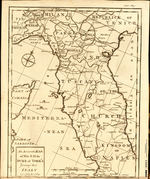 Accurate MAP, of His R.H. the DUKE of YORK'S, Journey thro' ITALY in 1763 & 1764
Map depicting the Duke of York's visit to Italy, landing in Genoa traveling through Florence, Rome, Naples returning through small towns along the Gulf of Venice. The area is labeled "Land of the Church"., Map of Italy. Prime Meridian is based in London. There are two scale bars on the map, one in English Miles, the other in Italian Miles. Map reads with North facing to the top Right corner of the map.

Amér. Sep. NOUVELLE ÉCOSSE et NOUVEAU BRUNSWICK
Includes notes related to industry and history for Nova Scotia, PEI and Cape Breton., Prime Meridian determined to be Paris, by referencing a point on the map, confirming coordinates with Google Earth and its coordinates from there based off of Greenwich meridian, and subtracting the difference. Map has interesting ripple affects around the land masses.

An ACCURATE MAP of AFRICA

An AUTHENTIC PLAN of the RIVER ST. LAURENCE, from SILLERY to the FALLS of MONTMORENCY
Map details the Battle of Quebec during the French and Indian War of 1759. The map depicts positions of all British (General Wolfe's camp, Admiral Holmes, and the French encampments) and French troops during the capture of Quebec. The map shows rivers, roads, adjacent towns, the lines of the armies, defensive works, encampments, and warships in the river are all indicated and named., Map of St. Laurence River, Quebec, with Quebec City. One scale bar in English miles. The prime meridian is unknown due to lack of information and graticule.

An Accurate MAP of EUROPE From the latest Observations & Discoveries
A colour washed map presenting different countries in colours along international borders. However, there is no distinction between Austria, Prussian, and the remaining German states, and Poland. Colour key on page 249., A quite commonly seen plate of Europe for Hinton's Universal Magazine. There is no scale bar, and the map uses London for its prime meridian; the coordinates and scale were calculated using the map's graticule.

An Accurate MAP of all His Majesty's Dominions IN GERMANY, with the Adjacent Countries
Main map presents specific regions of Germany during the Seven Years' War which involved every European great power of the time except the Ottoman Empire. Inset map on bottom left details the Dutchy's of Bremen and Ferden including army marches. A small inset map at the top right corner depicts the Dutchy of Saxon Lauwenburg. The dotted lines indicate where the army marched., Map of Germany, with two small inset maps. Prime Meridian is London. There is a small scale bar in the bottom right corner, in English Miles. Map reads with North facing to the top of the map. 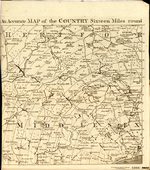 An Accurate MAP of the COUNTRY Sixteen Miles round LONDON Drawn and Engrav'd from an ACTUAL SURVEY [on 4 sheets]
Includes an explanation of roads and the extent of the Pony Express., There is no scale bar on the map, but there is a cylindrical grid with each section of the grid indicating a mile from the epicenter of the map when all 4 sheets are joined together.

An Accurate MAP of the WEST INDIES
There are directions and best course of travel, documented in the top right corner of the map., Prime Meridian is London (roughly 2.3 degrees from Greenwich). Graticule is in 5 degree increments.

An Accurate MAP of the WEST INDIES, with the Adjacent Coast
Map detailing known islands in the West Indies including Avis, Guadalupe, Porto Rico, St. Domingo, Jamaica, Cuba, Bear Islands, Barbardoes, and many more. Of note is a dotted line "The Tract of the Galleons from Spain" and "The tract of 9 Galleons from Carthagene to the Havana" and "The Tract of the Flota from Vera Cruz to the Havana" amd "The Return of the Galleons to Old Spain". Many gulfs and Bay's are depicted. Small arrows pointing southwest might indicate prevailing winds., Map of small sections of Southern North America and Northern South America coastlines, The West Indies. Prime Meridian is London. One scale bar on the map in Leagues. Map reads with North facing to the top of the map. There are little arrows throughout the map, most likely an indication of travel during exploration.

An Accurate Map of ESSEX Drawn from late SURVEYS with Improvements
Includes an engraving of the Arms of Colchester in the upper right corner., London Prime meridian.

An Accurate Map of the BRITISH EMPIRE in N'TH AMERICA as settled by the Preliminaries in 1762
Relief shown pictorially on map depicting settlements in North America by 1762. Shaded countries are those formerly claimed or possessed by France and Space and now ceded to Great Britain at the end of the French and Indian War. Capes, bays, and islands are etched including the Great Fishing Bank. Inset map depicts the mouth of the Mississippi., The map has two Prime Meridians; the top is based in London, the bottom is based in Ferro. The map reads with North facing to the top of the map.

An Accurate Map of the ENGLISH COLONIES in North America bordering on the River Ohio
Covers from Maine to South Carolina and west to Lake Michigan. Relief shown pictorially. Title enclosed in simple double-lined box. A map of English colonies in America before the Revolutionary War. Some English names are present before they were later changed in favour of more nationalistic ones. Lake Michigan is considerably smaller in this map, and its connection to Lake Huron is more than 300 km to the north of where the map places it., It is difficult to define a projection without graticule curvature; referenced to WGS/WebMercator unsatisfactorily. No scale bar is present on the map, and London is used for the prime meridian; both the scale and coordinates were calculated from the map's graticule.

An Accurate Map of the ROAD from LONDON to the LANDS END in CORNWALL, Passing thro SALISBURY, EXETER, PLYMOUTH, &c. [on plate with] The ROAD from EXETER to TRURO
Strip maps of road detailing city blocks, buildings, and crossroads from London to Truro Fifteen strips included on one sheet:Devon shire, Corvall, Cornwall, Dorset Shire, Hampshire, Surrey, Salisbury, Exeter, Plymouth, and Truro., Road maps of various roads in United Kingdom. Prime Meridian is unknown due to lack of information and graticule, There is no scale referenced on any of the maps. There are two maps on this one map sheet. North is orientated to the bottom right corner of the maps.

An Accurate Map of the SEAT OF WAR in the MEDITERRANEAN including the MOREA and Archipelago.
Map centered on Greece extending to parts of Albanis, Macedonia, Romania, and Anatolia. Some islands including Crete. Long article related to map on adjoining pages. In 1770 the Greeks, with the assistance of the Russians, had rebelled against the Turks. The rebellion was put down., Map is of the Mediterranean. There are two Prime Meridians, The top graticule being based in Ferro, and the bottom graticule being based in London. There are three scale bars on the map, One in British/French Marine Leagues, British Miles and French leagues. Map reads with North facing to the top of the map.