A Plan of the River Tees, and of the intended NAVIGABLE CANAL from Stockton by Darlington to Winston, in the Bishoprick of Durham
In typical Whitworth style it reads more as a schematic than a map of the time, relaying necessary information without ornamentation. The specifics of each lock are within the table located to the bottom left of the map., A plan of an intended canal between Staindrop and modern day Stockton-on-Tees, both located in County Durham, England. Good candidate for rubber sheeting as hydrologic features do not match well with a GIS. The scale of the map was calculated from the scale bar, and the coordinates were derived via georeferencing.

A Plan of the Town & Fortress of GARIAH belonging to ANGRIA the Admiral to the Sahou Rajah on the Coast of MALLABAR
Detailed explanation with keyed references on map. Starting on page 619 of this volume is a detailed and elaborate account of Angria the Pirate taking Feriah by Commodore Watson. Many references to Mongol's troops and forces., Prime Meridian is unknown on the map, due to the lack of graticule and information. The map reads with North facing to the left of the map. The Geographical location of the map is found on the west coast of India.

A Plan of the Town CHAGRE, &c.
A nearly perpendicular view of British Admiral Edward Vernon's attack on the Spanish Fort San Lorenzo from across the river Chagres during the War of Jenkins Ear. A lettered key is explained on page 405. The legend in the accompanying text details the events of the operation; the description of PP uses very interesting phrasing to describe the bombing action. British ships are flying the Union Jack, and while it is difficult to discern a command flag, the triple decker with distinguishing rear markings may be Vernon's flagship. The scene is depicted in media res with Spanish cañoneros locked in a firefight with the incoming fleet from the shore batteries., As this is a perspective view, coordinates given are for the centre point of the map, and only a very rough estimate is given for the scale.

A Plan of the Town and Fortifications of GIBRALTAR
A plan of the Town and Fortifications of Gibraltar, often referred to as "The Rock". Explanitory notes numbering 1 - 33 are in the adjoining text. Vignettes of ships of the line flying the Union Jack figure prominently in the work, and highly detailed linework and tinting show the area's differences in topography and terrain. This map of Gibraltar marks the fortifications of both the British Garrison and those of the Spanish from the Thirteenth Siege of Gibraltar (1727). Locations of the Old Mole and New Mole are drawn as are the Signal House and Salto Garrebo., The scale was calculated from the scale bar which is in English mile, and the coordinates were obtained via georeferencing.

A Plan of the intended New ROAD, from PADINGTON to ISLINGTON
Plan showing Berkeley Square and Grosvenor Square are shown at the bottom left, with the offices of a number of important companies listed. All dotted lines indicated new road proposal. References are alphabetically keyed., Street map of London, England. Prime Meridian is unknown due to lack of information and graticule. There is one scale bar on the map, represented in Feet. There is a legend on the bottom left side of the map, indicating places of importance, Map reads with North facing to the top and slightly to the right.

A Profile of the River Thames from Boulters Lock to Mortlake. Taken in 1770
"Detailed plan with detailed indications of elevation of the surface of the water and the bed of the river. A profile of the River Thames from Boulter's Lock to Mortlake. Boulters Lock, located alongside the bustling river was formerly called Ray Mill Lock, after the adjacent mill owned by the Ray family who produced flour. The first documented records show that there was a flash lock here in the 17th century. It built up a head of water to power the mills and a section of the weir would be moved to allow boats and barges through. A wooden pound lock was built here in 1770. In times past, about 70,000 tons of cargo would pass through the lock every year., Elevation eastward from Boulter's Lock and the depth of the river are plotted together in feet on the y-axis; the length of the traversed river is plotted in miles subdivided into furlongs on the x-axis. An interesting component of this from a data visualization angle is the use of grid lines subdivided into tenths and numbered inside of the 2 axes, but only for the relevant data along the river. This image cannot be georeferenced as it shows only a cross section of the river modeled as a straight line.

A SOUTH VIEW OF THE CITY OF GENOA
There is an extensive legend (called references) of locations in the city., As a map view, or bird's eye view, the scale changes across the map. For these views, we use a single point of reference. In this case we used the Lighthouse (#14 in the legend) as it is still standing. 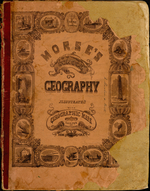 A SYSTEM OF GEOGRAPHY, FOR THE USE OF SCHOOLS, ILLUSTRATED WITH MORE THAN FIFTY CEOGRAPHIC MAPS, AND NUMEROUS WOOD-CUT ENGRAVINGS
According to the preface, the 1844 edition of Morse's School Geography was the first produced after a 16 year hiatus from the original publication run from 1784-1828 by the author's father. The 1851 edition explicitly states it uses 1850 US Census figures. There is also effort to update international boundaries between editions with the 1851 edition showing the result of the Oregon Treaty (1846) establishing the 49th parallel as the boundary between Canada and the US west of the Rocky Mountains. 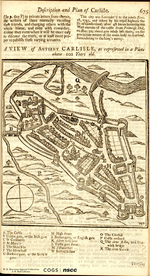 A VIEW of Antient CARLISLE, as represented in a Plate above 100 Years old
The prime meridian is unknown due to lack of information and graticule. There is no scale bar represented on the map; scale was determined by measuring the distance from the "Castle" represented as A in the legend, to "St Cuthberts" Church, represented as C in the legend. Map reads with North facing to the top of the map. 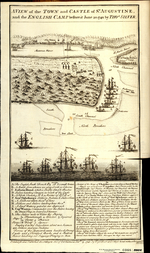 A VIEW of the Town and CASTLE of ST. AUGUSTINE, and the ENGLISH CAMP before it June 20.1740
This maps changes perspective from a map view at the top to more of a coastal view at the bottom. It is accompanied by text describing the siege., Because of the map perspective, the coordinates are approximate.

A complete CHART of the COAST of FRANCE, from Ostend, to Cape Finisterra, including the opposite Coast, of the BRITISH CHANNEL
Map depicts the most north western part of France detailing the Bay of Biscay and The Channel coastlines. Part of Flanders, Holland, and England are located in the topmost part of the map. A partial coastline of Iceland appears in the top left corner., Map of Bay of Biscay, off the coast of France. Prime Meridian is London. Map reads with North facing to the top of the map. Scale was determined by measuring between a degree of latitude.

A plan of the Towns, Cittadel and Port of DUNKIRK, before its Demolition
A plan of the town, citadel, and port, jetties, and port fortresses of Dunkirk before their demolition in accordance with the terms of the Treaty of Utrecht of 1713. The port and fortifications were a masterwork of military engineering, and the northern anchor of Vauban's Pré Carré. The jetties ran about a kilometre out to sea from the town to block the silt build-up, but were vulnerable to attack, thus the forts and castles shown in the plan were built for their protection. As a fortress, Dunkirk formed the northern anchor of the first line of Vauban's Pré Carré, a system of fortresses protecting northern France from attack. As a naval harbour, Dunkirk provided a valuable base for naval ships and privateers operating in the English Channel, an area where France had few good harbours. Only scant traces of the fortifications and port facilities survive to this day. Numbers are explained in the accompanying text beginning on page 228., The scale bar is in fathoms, and the work has no graticule; the scale was calculated from the scale bar, and the coordinates were obtained via georeferencing. Due to the extensive changes in the landscape, the georeferencing is slightly uncertain. 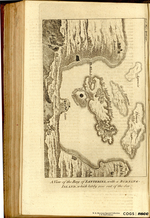 A view of the Bay of SANTERINI, with a BURNING ISLAND, which lately rose out of the sea
Map of Santorini Bay, Greece. The burning island was created by volcanic action. Shoals, trees, and some buildings are depicted., Map of Santorini Bay. Prime Meridian is unknown due to lack of information and graticule. Map reads with North facing to the bottom of the map. Map was georeferenced with data acquired from USGS's Earth Explorer.