A PLAN of the RIVER THAMES; and of the intended NAVIGABLE CANAL, from READING, to Monkey Island. Survey'd, in 1770, and 1771
The water route from Lancashire & Yorkshire to the East Coast. A plan of the River Thames west of London from Reading to Monkey Island near Bray, and of an intended canal to aid riparian traffic. There is little in the way of ornament; only the requisite information is present save for a few individual trees to represent wooded areas., Both the lengths of lines (miles, furlongs, and chains) and their water levels are tabled in the bottom right (feet and inches). The scale was calculated from the scale bar, and the coordinates were derived via georeferencing. This plan is reasonably accurate within a GIS.

A PLAN of the River LAGON, and of the intended NAVIGABLE CANAL from BELFAST to LOUGHNEAGH, Survey'd by Order of the Rt. Hon'ble and Hon'ble the Navigation Board of Ireland in 1768, By Rob't Whitworth, Engin'r
Map of proposed navigational canals from Belfast, Ireland to Lough Neagh branching off from the River Lagan. Though simple in appearance, plan notes many villages and towns, bridges, buildings, and rivers. Table of Irish distances including chains at bottom of plan., It is oriented with NNW at the top. Scale derived from map, coordinated derived via georeferencing.

A PLAN of the SIEGE of the HAVANA, Drawn by an OFFICER on the Spot 1762
Plan indicates besieged camps, General Elliots Camp, Col. Hows Camp, The Governor's Fort in Havana. Plan is distinguished by positional etchings of 20 warships in the Bay of Havana and at least 108 warships moored along the coast. Numbers indicate depth soundings., Map of Havana Harbour, Cuba. Prime Meridian is unknown due to lack of information and graticule. The map reads with North facing to the bottom right corner. There is no scale bar on the map, scale was determined by measuring from the tip of Morro to the northern tip of Havana.

A PLAN of the TOWN AND CHART of the HARBOUR of BOSTON Exhibiting a View of the Islands, Castle Forts and Entrances into the said Harbour
This chart documents the Port of Boston at the dawn of the American Revolution. Under the strain of the Boston Port Act imposed during the winter of 1774-75, New Englanders continued to agitate against their British government. An article accompanying the map is entitled “An Account of the Proceedings of the American Colonists since the Passing of the Boston Port Bill.” It informs the readers that the Governor had assured the town that “he will do all in his power to secure the peace and good order of the town" and goes on to list “the regiments, & companies now at Boston.” An English map of the seaward approach to Boston during the American Revolutionary War with a compass rose showing rhumb lines for the British sailors planning to enter the harbour. Soundings are taken around the islands and in the channels and guts. Dangerous rocks are marked by crosses, and sand banks by broken lines. Forts throughout the harbour are shown, and urban areas are symbolized by hatching., A line a lattidue and a line of longitude intersect at Boston detailing degrees north from the equator and west from the London Prime Meridian. The scale was calculated by the map's scale bar, and the coordinated were derived via georeferencing.

A PLAN of the TOWN and HARBOUR of MAHON, &c.
A plan of the city of Mahón on Minorca Island located in present day Spain. A lettered key explained on page247. A major British naval base at the time, important buildings, fortifications, and natural features are described by the legend in the accompanying text, along with the road built by Brigadier General Richard Kane; St. Philip's Castle and Town figure prominently at the mouth of one of the best natural harbours in the British Empire. Hachures on both land and for shallow water, and is differentiated a heavy light weight along the coast, and slightly different hachure patterns. Small vignettes of trees, windmills, churches, and farmhouses are present throughout the land., The scale bar is in English miles, and there is no graticule; the scale was calculated from the scale bar and the coordinates were derived via georeferencing.

A PLAN of the proposed NAVIGABLE CANAL, from ANDOVER to REDBRIDGE, in the County of SOUTHAMPTON, Surveyd in 1770
A relief map depicting canals, rivers, bridges, and settlements along the canal. The cartouche is elaborated with scrolls., A plan of a proposed canal between Andover, Hampshire, and Millbrook, a suburb of Southampton. Like the majority of other canal maps in this collection, it is quite sparse in ornamentation, with some hatching to denote elevation and a sylvan style cartouche. The details of the locks are outlined in the table to the bottom right. The map is oriented with East at its top, and the scale bar is in English miles. Coordinates were derived via georeferencing, and the scale was calculated from the map's scale bar. This canal was eventually built with perhaps some small modifications. A good candidate for rubber sheeting as it does not match up well within the GIS. 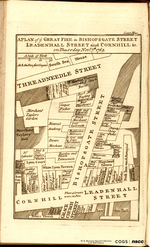 A Particular MAP, to Illustrate Gen. Amherst's Expedition to MONTREAL; with a Plan of the Town & Draught of the Island
Map depicts General Amherst's expedition along St. Lawrence River from Quebec to the Thousand Islands and onto the Niagara River, also a plan of the city of Montreal. Included on the map are the names of First Nations such as Iroquois, Senekaa, Cayugaes, etc. An inset map details the plan of the city itself including major streets and fortifications., Prime Meridian is unknown due to lack of Graticule and information. There is a scale bar on each map. Inset map for Montreal has its own legend with place's within the City of Montreal.

A Particular Plan of the TOWN and FORT of ST. PHILIP [on plate with] A DRAUGHT of the TOWN and HARBOUR of MAHON with ST. PHILIP'S FORT and Its FORTIFICATIONS
Top map includes engraved references a-t. Bottom map with title and 5 lines of engraved text. On page 11 of the volume begins an account of the island: "A plan of St. Philip's Castle with its accompanying town, and another smaller scale plan along with the strategically important harbour and the town of Mahon, in Minorca, one of the Balearic Islands". The explanatory legend details the castle's fortifications, while soundings and coastlines are shown for the harbour. A description of the work sits below the map. engraved on map are various important structures: Nunnery, Victualing Office for the navy, Product House, Mast house, Quarantine Island, The New Road, and Navel Hospital. Fortifications are detailed as are vegetation, buildings, fathom depths, and pathways., Each map has a scale bar in furlongs, and no graticule is present in the map; the scale is calculated from the map's scale bar, and the coordinates were obtained via georeferencing and pertain to the map of the harbour.

A Perspective View of Quebec drawn on the spot
Ship and two sailboats in foreground; Quebec in background. A copper etching of a perpendicular view of Québec City drawn from across the St. Lawrence. Ships flying what appear to be the Cross of St. George appear at the forefront against the city's skyline. Accompany text in facing pages eloquently and with detail describe the harbour, flag ships, Lower-Town, Upper town, pavilions, palaces, and edifices. The description includes comments on the hardships and actions of the gallant soldiers., The coordinates refer to a single point in the image's centre to which it has georeferenced.

A Perspective View of the City of BATH
Map views cannot be fully georeferenced because the scale and perspective varies across the view.

A Plan of BREDA, with the Adjacent Countries
Prime meridian is unknown due to lack of information on the map. There are three scale bars represented on the map, English Miles, Dutch Miles and German Miles.

A Plan of CARTHAGENA
A plan of Cartegena and surrounding waters as if attacking from the west. Attacking forces and Spanish fortifications are outlined in the legend found in accompanying text. The plan shows the Isla de Tierra Bomba connected to the mainland. Churches, fields, and forests are represented pictorially; the French ships at L are not individualized. The textual explanation places the city of Cartagena approximately 675 km to the north of its actual location. A lettered key is explained on page 193., No scale bar or graticule are present on the map; the coordinates and scale were derived via georeferencing.

A Plan of CONSTANTINOPLE Places adjacent and Canal of the BLACK SEA
Map of Constantinople with key identifying 75 locations focusing on the topography of the city and surrounding area. Individual tress, plowed fields, and buildings are etched. Elaborate cartouche features military swords, other weapons, flags, and a jeweled turban., Map of Istanbul. Prime Meridian is unknown due to lack of information and graticule. There is one scale bar on the map, represented in Italian Miles. Map reads with North facing to the Left. There is an arrow in the canal that shows that the water flows from North to South.