A Draught of the Road and Harbour of BREST with the adjacent Coast
Decorative rococo title cartouche. Detailed harbor chart with many soundings in the Road of Brest. Locates all harbors, towns, rivers, capes and islands. The map labels the water depth in the bays and seas around Brest. The walled city of Brest is well shown, as are small houses, churches and windmills. Map extends from Le Counquet to Le Faou, detailing the coastline, anchorages and soundings throughout the area., Map of the Harbour of Brest, located on the west coast of France. The Prime Meridian is unknown on this map, Due to lack of information and graticule on map. Map reads with north facing to the top of the map, but once map was referenced, north was orientated slightly to the top left of the map. There are two scale bars on the map, one in Miles, the other in Leagues.

A GENERAL CHART OF THE ISLAND OF NEWFOUNDLAND with the Rocks & Soundings, Drawn from SURVEYS taken by ORDER of the RIGHT HONOURABLE the LORDS COMMISSIONERS of the ADMIRALTY
Prime Meridian is Greenwich., Surveyed to support enforcement of fishing rights as outlined in the Treaty of Paris (1763), Cook and Lane's survey of Newfoundland took 3 years. This work and the resulting map established Cook's reputation and directly led to his command appointment of the Endeavour and subsequent South Pacific expeditions for which he is most famously known.

A GENERAL CHART of the WESTERN OCEAN
The original cartography was based on maps from the late 1600's. It remained unchanged through it's various printings and states (as late as 1767) giving it a somewhat dated look as compared to other maps published of the area during the same time period., Prime Meridian is Azores Meridian. Note the graticule through the map rather than the edges as is more usual. Map reads with North facing to the top of the map.

A GENERAL PLAN of the several CANALS, given in the Course of this Magazine
A small scale map of England and Wales giving a generalized view of the canals shown in the magazine. The map avoids cartographic complexity, showing only coastline, hydrography, cities, and a broken line for highlighted roads. There accompanying text contains the legend for the letters, showing distance in miles between points. The purpose of the symbol/medallion/coin east of Cardigan Bay is unknown at this time., The map was georeferenced to prioritize the hydrography, consequently the coastline and near the map extents are quite inaccurate. The scale and coordinates for this map were derived via georeferencing.

A General MAP of SAXONY and BOHEMIA, With the adjacent Countries, including all SILESIA
Map of the kingdom of Bohemia divided into districts by strong lines. The region remained in Austrian hands after 1763. It contains the sources of the Oder and Moravia rivers. Originally part of Moravia, it became a separate crown land of the Austro-Hungarian Empire in 1849. Czechoslovakia gained the larger part of it by the Treaty of Versailles in 1919. Germany seized it 1938, and then it was returned to Czechoslovakia in 1945. It is now part of the Czech Republic., Map of Germany. Prime meridian is unknown, map grid does not match a meridian or the equator. Three scale bars on the map; English Miles, German Miles, and Common French Leagues.

A General Map of the DISCOVERIES of Admiral DE FONTE & others, BY M. De l'Isle
Map depicts the mythical Northwest Sea Passage from the Atlantic to the Pacific as proposed by early navigators. Includes tracks and notes from the voyages of Bernarda, Tchirikow, de Aguilar, de Fuca, Behring, and various discoveries and dates referenced only as Russian. Many notes on map, such as: "In this Inlet is an island with a Mountain like a Pillar"; "Land seen by M. Spanberg in 1728 non frequently by the Russians who fetch rich furs from it."; "A great Tract of Land discover'd in '722 to which the Tzutzy fled when they were pursued by the Risses who have not yet subduded them.", Map of Northern Canada & Russia. Map is heavily distorted, made for a rough georeferenced. Prime Meridian is Ferro. There is some land mass's on the map that do not even exist.

A Genuine PLAN of CHERBURG with the Fortifications as intended to be finished according to the Design of Mr. De Caux
Large plan of Cherburg depicting inner harbour and basin including fortifications. Small inset, bottom right, depicts a plan of Cherburg before the fortifications were demolished in 1689. Another small inset map, bottom left, shows placement of Cherburg Road, QuerQueville Bay, and the Bay des Marees. The word "suburbs" is used to indicate area outside of the city., Map of Cherbourg located on the North East coast of France. Two inset maps. Each map has it's own scale bar, Prime meridian is unknown due to lack of information and graticule.

A MAP OF CONNECTICUT and RHODE ISLAND with LONG ISLAND SOUND, &c.
Detailed regional map shows Fairfield, New Haven, and New London counties in Connecticut, towns, roads, rivers, and place names in Connecticut, Rhode Island and part of Long Island. Includes copper mine near Simsbury, Conn. Also shows relief. An English map of Connecticut and Rhode Island. Hachuring is used to display topography. Includes copper mine near Simsbury, Longitude is taken from the London Meridian. Coordinates and scale derived from the graticule and scale bar of the map. Georeferenced to stereographic projection.

A MAP OF DEVON-SHIRE Drawn from the best Authorities
Includes an engraving of the Arms of Exeter in the lower left corner.

A MAP OF INDEPENDENT TARTARY Containing THE COUNTRIES OF THE KALMUKS and UZBEKS, with the TIBET
Looking closely at this map reveals intersting notations used by Dunn to refer to groups of people or geographical features/regions. Some examples include: "Siah Pushes or Black-Clothes People"; "Ruins of Serai". There seem to be very few places named on the map in use today. 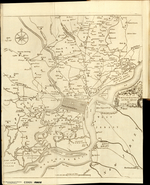 A MAP OF PHILADELPHIA and Parts Adjacent, By N. Scull and G. Heap
Scull and Heap's map was originally published in Philadelphia in 1752 by Nicolas Scull. Scull was the first member of an American family to engage in cartography as a business. Apart from his map of Philadelphia, he is also well known for his general map of the province of Pennsylvania, the first of the province to be printed on the North American continent. As a guide, in the lower right hand quadrant there is placed a table of The Distances of particular Places, in this Map; from the Court Houfe. Take note of the entry Merion Meeting N.W. which is identified as being located at 7 miles and 5 furlongs (a surveyors furlong is equal to 660 feet in length). The table of distances below the cartouche has been deleted and new names and roads added. An English map displaying Philadelphia and surrounding area. The city proper is generalized into a street grid, while surrounding farms are labelled by family. A cannon battery resides just south of the city at the entrance of the shipping channel of the Delaware River., Coordinates were derived via georeferencing, and the scale was calculated from the map's scale bar.

A MAP OF THE COUNTRY AROUND DRESDEN, with the Towns and Fortresses which the serveral Armies have occupied during the Campaign
Map of the counties Lusatia, Misnia, and Bohemia around the city of Dresden, Germany., Map of the city of Dreseden and the surrounding country, Germany. Prime meridian is based in London. Map reads with North facing to the top of the map. There are two scale bars on the map, one in English Miles, and the other in German Miles.

A MAP OF THE ISLAND of JAMAICA
Map of Jamaica noted as an ideal located for the general rendezvous of fleets of all services in the West Indies from a safe harbour. Map depicts all bays along the coastline and some rivers, valleys, mountains and vales inland. No towns or cities indicated., Map of Jamaica Island. Prime Meridian is based in London. The map reads with North facing to the top of the map. One scale bar represented in Leagues.

A MAP of FALKLANDS ISLANDS
Map shows the coastlines with limited interior detail. Nine ship-based views with distance to surrounding islands indicated. Map of Falkland islands five years after first settlement during brief conflict between Spain and Britain over control., Map of Falklands Islands, located just east of the Southern Tip of South America. Prime Meridian is unknown due to lack of information and graticul; however, at bottom right corner it states "51º 22' South Latitude and 64º30' West Longitude from latest Observatories". There is one scale bar on the map, represented in Miles. There are 9 Cross maps throughout the map.