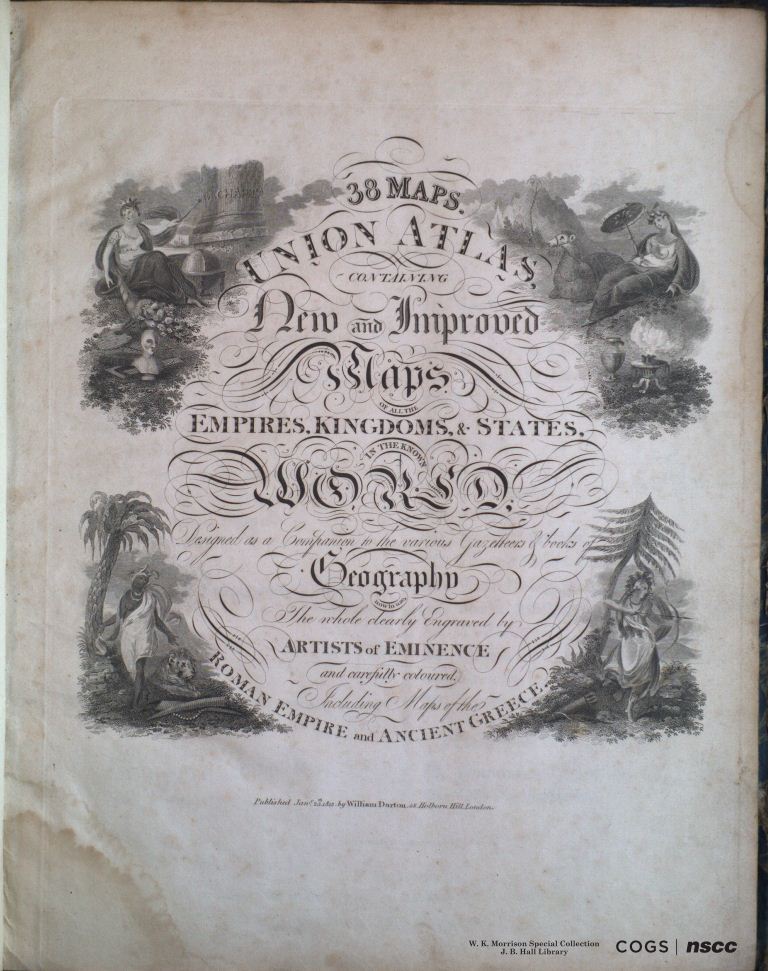 A CHART OF DELAWARE BAY AND RIVER, from the Original BY MR. FISHER OF PHILADELPHIA, 1776
This Revolutionary War map was based on the chart Joshua Fisher made of Delaware Bay in 1756. The Fisher map is considered an important map of the bay and river in the eighteenth century. Joshua Fisher's early chart of Delaware Bay from the Sea-Coast to Reedy-Island was published during the French & Indian War, and was immediately suppressed by the Assembly, fearing that its falling into enemy hands would make Philadelphia a target of the French navy. Identifies the ship channels from Cape May and Cape James up the Delaware River past Salem Mass. Wilmington, Newcastle, and Chester to the small town of Philadelphia, Pennsylvania. The accompanying text includes an article updating the British public on the war in the colonies. It shows the bay and beyond to Philadelphia complete with place names and the location of navigation hazards along the waterway. Locates Cape May, Turtle Gut Inlet, Cape James, Egg Island, Salem, and much more. Two distance scales and the direction rose with fleur-de-lis orients north to the right. A large discolouration permeates the majority of the map element., Scale bars in both English and Nautical miles. Extents calculated via georeferencing. 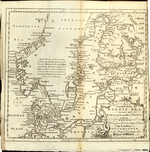 A CHART of the BALTIC SEA, GULFS OF FINLAND and BOTHNIA., with the SOUND, Drawn from the best Maps & Charts
Map with text explaining the ceding of Swedish territory to Russia. Map details the coasts of Norway, Sweden, Denmark, and Finland as well as the Baltic republics and Germany., Map of the Baltic Sea. Prime Meridian is based in London. Scale was determined by measuring between 5 degrees of Latitude. Map reads with North Facing to the top of the map. There is a scale bar along the right side of the latitude grid, in leagues.

A CHART of the FRENCH COAST from Port Louis to the Mouth of the Loire; exhibiting Bell Isle, Quiberon Bay, and the Isle of Dumet where Sr. Edw'd Hawke defeated the French Fleet Nov'r 20, 1759
A chart of the coast of Brittany, including the mouth of the Loire, where Nantes, France's largest port at the time, lay only a few kilometres up river. Soundings, sandbanks, rocks/hazards, and rhumb lines emanating from an off-page compass rose at the mouth of the harbour are present to aid marine navigation. Some trees and grassland are shown to represent land features. As a chart there is extensive annotation of shore features; on land Questembert is labelled Quitamber. A Fluer de Lis in centered at bottom placing scale., There is no scale bar for the chart, and the graticule uses London for the prime meridian; both the scale and coordinates were calculated using the map's graticule.

A CHART of the ISLANDS discover'd in the neighbourhood of OTAHEITE in the Course of several Voyages round the World MADE BY the Cap'ns Byron, Wallis, Carteret & Cooke in the Years 1765, 1767, 1769
Shows four tracts from the four Capts. mentioned in the title., No scale bar or compass on map.

A CHART of the SEA COAST of NEW FOUNDLAND, NEW SCOTLAND, NEW ENGLAND, NEW YORK, NEW JERSEY with VIRGINIA and MARYLAND
The original cartography was based on maps from c.1713. It remained unchanged through it's various printings and states (as late as 1784) giving it a somewhat dated look as compared to other maps published of the area during the same time period., Prime Meridian is unknown, due to lack of top and bottom graticule.

A CHART of the WORLD according to Mercators Projection Shewing the latest discoveries of Capt. COOK
Shows the tracks of Capt. James Cook's voyages from 1768-1780. Antarctica is not shown and is referenced as different forms of ice blocking the path. Bering Strait is shown impassible due to ice between both continents on July 1779. Engraved under the cartouche "O'clock Hours at London" and the bottom graticule shows hours at lines of longitude. This is one of the earliest maps we've seen indicating time., Projection makes it difficult to obtain accurate latitude coordinates. 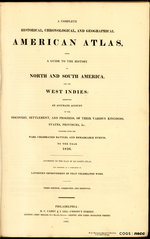 A COMPLETE HISTORICAL, CHRONOLOGICAL, AND GEOGRAPHICAL AMERICAN ATLAS, BEING A GUIDE TO THE HISTORY OF NORTH AND SOUTH AMERICA, AND THE WEST INDIES
Contains forty-six double-page hand colored copper engraved maps, most with descriptive letterpress in margins, and many with supplementary text pages following; one double-page engraved plate of mountains (uncolored); and one double-page colored plate of river lengths. 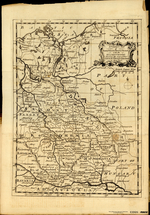 A CORRECT MAP of Saxony Bohemia Moravia Silesia &c. with the ADJACENT COUNTRY. Shewing the Seat of War between the PRUSIANS & AUSTRIANS in Those Parts
A map showing the area around Silesia, a heavily contested area between the Austrians and Prussians during the Seven Years War. A cartouche frames the work's title near the top right corner. The Oder and Elbe river systems are symbolized with double lines to signify major waterways; light relief is shown through hatching, individual trees show wooded areas, and broken lines delineate borders., The scale bar is in British miles and London is used for the prime meridian; the scale was calculated from the scale bar and the coordinates from the map's graticule.

A Chart of the Sea Coast between ENGLAND and FRANCE, as also of SPAIN, PORTUGAL, part of ITALY, and BARBARY; including so much of the MEDITERRANEAN SEA as Is likely to be the Seat of War
A chart showing the coastline of Southwestern Europe and surrounding waters. Two large, crisscrossing compass roses show rhumb lines around the Bay of Biscay and the Mediterranean. The larger compass rose sites in the Mediterranean Sea. Many of the coastal annotations are perpendicular to the coastlines, reminiscent of the Thames school of mapmakers. Inland features are ignored save for major capitals. Perimeter scale bar in leagues., There is no scale bar, and London is used for the prime meridian.

A Complete MAP of GERMANY comprehending in one View the different Seats of the Present War
Map covers most of Europe as depicted during the Seven Years' War. Map shows larger towns and major rivers specifically the Rhine River from source to its mouth beyond Rotterdam., Map of Germany. Prime Meridian is London. No scale bar on the map, Scale was determined by measuring between a degree of latitude. 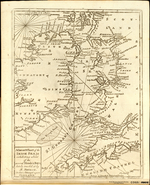 A Correct Chart of the IRISH SEA, &c. exhibiting a View of the several Islands & Bays, lately touch'd at by M. THUROT, in his Attempt upon IRELAND
A nautical chart of the region along the coastlines of the British Isle including Scotland, Ireland, and Wales. The "Nymph Bank" is highlighted and a tiny fleet of ships is located between the Isle of Man and Belfast. A fleur-de-lis and rhumb lines embellish the chart., A map of the West Coast of Wales, and the majority of Ireland. Prime Meridian is London. Scale bar in the top left hand corner, represented in Miles.

A Correct MAP of the ROAD from LONDON to CARLISLE, commencing at Darlaston Bridge, in the CHESTER ROAD [on plate with] The ROAD from CARLISLE to BERWICK
Strip maps of road detailing city blocks, buildings, and crossroads from London to Carlisle then Carlisle to Berwick Eleven strip maps I plus plan of the town of Carlisle., Various Road maps located in the United Kingdom. There are two road maps on this one map sheet. Both maps read with north facing to the top Right of the map. Scale was determined by measuring the distance of the roads. Prime Meridian is unknown due to lack of information and graticule.

A Correct map of SOUTH AMERICA with the latest discoveries
Uses London as the prime meridian.