A New and Accurate Map of the South-east Part of GERMANY containing the CIRCLES of AUSTRIA and BAVARIA, Part of BOHEMIA, and the Marquisate of MORAVIA; showing the present State of the War between the Prussian & Austrians
London is used as the prime meridian. In the absence of a scale bar, the scale was calculated using the distance between lines of latitude. 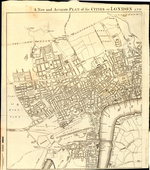 A New and Accurate PLAN of the CITIES of LONDON AND… (part of map missing according to Jolly)
Map detailed landmarks, streets, bridges, and surrounding area. Extends from Hydle Park to Limeshouse, and from Islington to Lambeth. Palaces, hospitals, squares and courts are marked., Map of downtown London, UK. Although this is map has it's own Repository number, there is an apparently part B of the map. The Prime Meridian is unknown, due to lack of graticule and information. There is no scale bar on the map, so the map was referenced by measuring from the East side of the Westminster Bridge to the Summer House. The map reads with North facing to the top of the map. The map was georeferenced with Data acquired from USGS's Earth Explorer.

A New and Compleat MAP of the AUSTRIAN, FRENCH & DUTCH NETHERLANDS, commonly call'd FLANDERS; from the latest Improvements
A map of the historical territory of Flanders. A legend for the map's washed colouring is present in the bottom left corner. The elaborate scroll motif frames the work's title., There is no scale bar, and London is used as the prime meridian; both coordinates and scale were calculated using the map's graticule.

A New and Compleat MAP of the PARTS of SWEDEN, RUSSIA, GERMANY, POLAND, and DENMARK; bordering on the BALTICK SEA: Exhibiting the Present Seat of War between those several Powers
A wash coloured map of the area around the Baltic Sea showing political territories during the Seven Years War, around the time of the Raid on Berlin. Delineation of borders is done primarily via colouring; relief and woodland are represented. Two compass roses show rhumb lines for marine navigation throughout the Baltic all the way to the mouth of the Neva and Saint Petersburg. A classic scroll cartouche frames the map title., There is no scale bar present on the map, and London is used for the prime meridian; the scale and coordinates were calculated using the map's graticule.

A New and Correct CHART of the SEAT of WAR, on the Coasts of FRANCE, SPAIN, PORTUGAL and ITALY; with the Adjacent Coasts & Islands, in the OCEAN and MEDITERRANEAN SEA...
A map of Western Europe and North Africa around the end of the Seven Years War. As a chart coastal features are emphasized, and there is very little promoting figure/ground distinction save some light shading. Due to the small scale no soundings are shown; a few hazards and sand banks are displayed around Jersey and the English Channel. A 32 point compass rose shows rhumb lines around the Bay of Biscay, and the St. Georges and English Channels. The cartouche includes authority and is exceedingly elaborate with etches of sailing ships and sail boats, birds in flight, and vegetation., The scale bar is in leagues, and London is used as the prime meridian; the scale was calculated from the scale bar and the coordinates from the map's graticule. 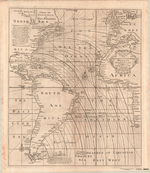 A New and Correct CHART of the WESTERN and SOUTHERN OCEANS Shewing the Variations of the COMPASS according to the latest and best Observations
Originally produced by Edmund Halley (of Halley's Comet fame) in 1700, this map shows magnetic variations of the compass, with a double-line crossing just south of Bermuda indicating the line of no magnetic variation and is corrected to include improvements to Halley's method developed in 1744. Place names are focused on the coasts, with the otherwise blank interiors of the continents supporting decorative cartouches. An image of a pair of diving ducks appears near the southern tip of South America along with a note explaining that "animals of a middle species between a bird and fish" can be seen in the seas in the area. It is also interesting in that the graticule goes through the map rather than drawn on the borders., Prime meridian is London, as shown in the map

A New and Correct Chart of the North Part of America from NEW FOUND LAND to HUDSONS BAY
Although Walter has a notation on the map of c.1745, research definitely marks this as the 4th State with the extension of the fishing banks to Cape Race and the added stippling of the fishing banks. This state was published unchanged in the English Pilot. 4th Book from 1753-1775., Map of north eastern North America, featuring explored coastlines, depth measurements, and ocean banks (stippled). The presence of rhumb lines indicate mercator projection. Map scale is not provided; the representative fraction provided is a representation of the scope of the map. Due to the projection, scale factor increases with latitude. Map uses Tenerife meridian along the top and Cádiz meridian long the bottom. 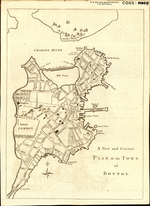 A New and Correct PLAN of the TOWN of BOSTON
Typical example of late 18th century British journalistic cartography. Using pictorial symbols it shows Charlestown in ruins, following the British burning of the town during the battle. The main focus of the map is Boston occupied by the British emphasizing fortifications. Plan pictorial relief details streets, trees, hillocks, various wharfs, the Charles River including etching of several buildings at the "Charle's Town in Ruins" at topmost part of plan. The 'Boston Neck' in the southwestern corner no longer exists in the present due to the extensive changes to the coastline of the area that have taken place since the map's creation., English large scale town plan of Boston showing fortifications made during the American Revolutionary War.

A New and accurate MAP of CORMANDEL, MALABAR, BENGAL &c. exhibiting the Principal European Settlements in the EAST INDIES
A map of the southern Indian subcontinent and part of Sri Lanka for Hinton's Universal Magazine. Colour washed according to nationality. The subcontinent was little explored at the time, and it is difficult to trace the origin of many of the place names present, but some may derive from the text 'Travels of Pietro Della Valle in India' from 1664. 2 compass roses adorn the map to aid in practical marine navigation., The map claims to use London for its prime meridian, but features are generally ~6° to the west of the map's published coordinates, closer to Lizard Point than the London meridian but is understandable due to the technological limits of the day. Coordinates are thus given from both the map's graticule and from georefencing; no scale bar is present therefore it was obtained via georeferencing as well.

A New and accurate MAP of SAXONY, PART OF BRANDENBURG, SILESIA, POLAND and BOHEMIA, Exhibiting the present Seat of War between the Prussians and Austrians
A lightly coulour washed map of the historical territories of Saxony, Brandenburg, Silesia, Poland, and Bohemia around the opening of the Seven Years War, showing areas gained and lost during the previous War of the Austrian Succession, and the political maneuvering of Emperess Maria Theresa and other European leaders. Washed colouration is used to differentiate certain nation states, while for others only broken lines are used for delineation. Small vignettes are used for major cities, scattered trees are used to represent scattered woodland, and some hachuring is used to show relief. This map shows a small, historical snapshot of an important area at the beginning of a war that would change the world., The scale bar is in English miles, and London is used to the prime meridian; the scale and coordinates were calculated from the map's scale bar and graticule. 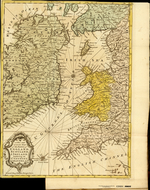 A New and accurate MAP of the PROVINCE of NOVA SCOTIA, in NORTH AMERICA; from the latest Observations
Shows named harbours and inlets., No scale bar or representative fraction. The scale was calculated by using the distance between lines of latitude and rounded to the nearest 100,000. Prime Meridian is the Ferro Meridian.

A New and accurate MAP of the South-west Part of GERMANY, comprehending the CIRCLES of UPPER and LOWER RHINE, SWABIA, FRANCONIA, BURGUNDY, LORRAIN, and COUNTRIES adjacent: Exhibiting the Present Seat of War
A map of German nations during the 7 Years War. Delineation of borders is done through colouring and broken lines; borders are products of political divisions within the Holy Roman Empire at that time., The scale bar is in English miles, and London is used for the prime meridian. The coordinates and scale were calculated from the graticule and scale bar.

A New and correct PLAN of the City and Fortifications of MAESTRICHT
Plan details with references keyed numerically the city and specific fortifications. Scale is in Rhine Land Rods. One warship is etched in the Maes River., Map of the City of Maastricht, found in the Netherlands. Prime Meridian is unknown due to lack of information and graticule on the map. There is a scale bar on the bottom right corner, represented in Rhine Land Rods. 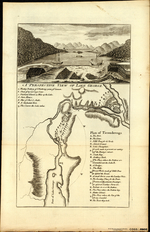 A PERSPECTIVE VIEW OF LAKE GEORGE [on sheet with] Plan of Ticonderoga
Includes keys to places of interest regarding the French and Indian War. Copper engraving. One of a set of maps relating to the Battles at Ticonderogo and Quebec at the end of the French and Indian War. This plan of the area surrounding Fort Ticonderoga includes a lettered legend to key locations of the British army's movements. Above the plan is a view of Lake George showing the fort and munitions piles in the foreground, with two gunboats anchored near the shore. A view of what is assumed to be the north shore of Lake George viewed from the settlement of Ticonderoga and a plan of the area connecting Lake George to Lake Champlain, including the prominent fort guarding passage at the confluence, detailing the battle between the English and French. On July 26-27, 1759, General Sir Jeffrey Amherst led a British military force to high ground overlooking Fort Ticonderoga, which was defended by Frenchmen under the command of Brigadier General François-Charles de Bourlamaque. As the French were grossly out-manned by the British, de Bourlamaque decided to withdraw his forces rather than defend the fort. In their retreat, the French forces attempted to blow up the fort, but succeeded only in destroying the fort's powder magazine. After the fall of Quebec on September 13, Montreal was the sole remaining French power center in Canada. General Amherst began a three-pronged offensive converging on Montreal the following spring. When Vaudreuil de Cavagnal surrendered on September 8, 1760, this ended the last major campaign of the French and Indian War., No scale bar or graticule is present for the plan; the scale and coordinates were obtained via georeferencing.