The River St. John
Includes inset "The Entrance of the River St. John". The elliptical cartouche includes the following text and is typical of DesBarres' navigational notes when present: "The River St. John, has sufficient depth of Water for large Ships to the Falls. Whence it continues Navigable 80 miles up into the Country of Vessels of 100 Tons. At Fort Frederick, common Tides rise 18 feet perpendicular, and Equinoctial Spring Tides 25 Feet, above the Falls, it seldom flows more than 4 Feet. When the Tide has risen 12 Feet, at the Fort, the Falls are Smooth, after which during about 20 Minutes, they are passable. At times of great Freshets, which generally happen between the beginning of April, & the middle of May, from the melting of the Snow, the Falls are absolutely impassable, to Vessels bound up the River, as the Tide does not reach to their Level.", Imprint: Publish'd according to Act of Parliament, Feb'y 14, 1779, by J. F. W. DesBarres. Scale bars in statute and nautical miles.

The Roads, of TOULON, with the adjacent Country
Map of Toulon, France. The Scale was determined by measuring from Cape Capet to The Great Tower. Prime Meridian is unknown due to lack of information and graticule. Map reads with North Facing to the Bottom Right of the map.

The Seat of WAR in the Circle of WESTPHALIA
Map detailing area of war stages in Netherlands with the Hague, Rotterdam, Amsterdam and Groningen. An account of the was in printed on page 331 of the journal., Map of the South Scandinavian countries. Two scale bars on the map, one in English Miles, the other in German Miles. The Prime Meridian is London. The map reads with north facing to the Top right of the map. 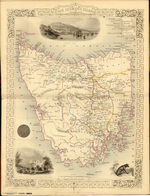 VAN DIEMAN'S LAND OR TASMANIA
A map of Van Dieman's Island, or modern day Tasmania with hand-coloured borders showing historical administrative divisions. An engraved view of the residence of the Van Dieman's Land Agent in Circular Head, a view of the harbour at Hobart Town, and the seal of VDL are shown, as is a depiction of the now assumed to be extinct Thylacinus Cynocephalus (Tasmanian Wolf). Woolnorth district has a description of the immense forest covering the area., The scale bar is in miles, and Greenwich is used for the prime meridian; the scale was calculated from the map's scale bar and the coordinates were obtained via georeferencing.

VICTORIA, PORT PHILLIP
A map of the state of Victoria with brightly hand-coloured county borders. A view of Melbourne, and another of the River Glenig are present, as are engravings of Aboriginals in battle and at rest, and 2 kangaroos. Relief is shown, and coastlines are lightly shaded in blue watercolouring and with the use of tinting tools., The scale bar is in miles, and Greenwich is used for the prime meridian; the scale was calculated from the map's scale bar and the coordinates were obtained via georeferencing. 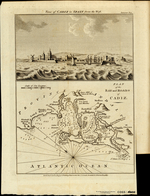 View of CADIZ in SPAIN from the West [on plate with] PLAN of the BAY and ROADS of CADIZ
A plan of Cadiz, Spain, along with its waters and surrounding area accompanied by a view of the city from the bay during rather tumultuous seas. The plan shows many characteristics of a chart including soundings, sand banks, rocks/hazards, and rhumb lines. The top half of page depicts the bay and view of the city with structures of windmills, churches, homes, and fortifications. Several boats both single mast and battleships are depicted as are vigorous wave action., The scale bar is in marine leagues, and there is no graticule present; the scale was calculated from the scale bar and coordinated were obtained via georeferencing.

View of PORT ROYAL and KINGSTON HARBOUR in the Island of JAMAICA
This illustration is taken from Edward Long's 'The History of Jamaica,' and depicts the harbours of Port and Kingston. During the 17th century Port Royal flourished and was the principal Spanish trading port but it was later devastated by an earthquake in 1692, a fire in 1703 and a hurricane in 1722. Eventually the town was abandoned and Spanish Town became the island's capital (until 1872, when it transferred to Kingston). Kingston harbour was considered the most beautiful in the world at this time. A view of the Port Royal/Kingston, Jamaica harbour viewed from its entrance to the south. From this vantage, Port Royal appears possibly on top of the water, and the tombolo forming the Palisadoes seem incredibly narrow, possibly due to the earthquake of 1692., Coordinates refer to center point to which the image is referenced in right-reading.

WEST CANADA
A map of "West Canada" divided down to the township level, ranging from past the Ontario - Québec border to Cockburn Island in the North Channel of Lake Huron. Engravings of Niagara Falls, Kingston, Natives at rest, and a beaver, along with the Great Seal of Upper Canada., The scale bar is in miles, and Greenwich is used for the prime meridian; the scale was calculated from the map's scale bar and the coordinates were obtained via georeferencing.

WEST INDIA ISLANDS
Map of West Indian Islands (Caribbean Islands). Includes vignettes of Kingston, Jamaica, from the Commercial Rooms and an engraving of the seal of Jamaica. 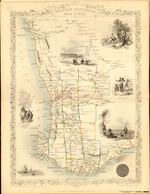 WESTERN AUSTRALIA, SWAN RIVER
A map of the southwestern portion of the state of Western Australia, focusing on the area around Swan River, with brightly hand-coloured county borders. Engravings of pastoral, aboriginal, and maritime scenes are present throughout the map, along with a view between Perth and Fremantle, and Great Seal of Western Australia at that time. Relief is shown, and coastlines are lightly shaded in blue watercolouring and with the use of tinting tools., The scale bar is in miles, and Greenwich is used for the prime meridian; the scale was calculated from the map's scale bar and the coordinates were obtained via georeferencing.

WESTERN HEMISPHERE
A steel engraved hemispheric style map of the Western Hemisphere. Hand-coloured lines delineate national borders. Engraved vignettes of scenes depicting New World wildlife, and scenes of ordinary life of the locals, each in its own oval or round border, frame the map proper. Islands with pink outlines show certain British territories. Relief is shown, along with coastal shading., Greenwich is used for the prime meridian, and no scale bar is present; the scale and coordinates were calculated using the map's graticule.

WORLD ON MERCATOR'S PROJECTION
A steel engraved map of the world using a Mercator projection, with hand coloured continental borders (except for the British Isles, which are done in the same pink as its dependencies), and pink lines to denote British colonies. 7 illustrations (drawn by Warren) of prominent world landmarks are present throughout the work, and the steam routes to the colonies from Britain are coloured in blue. Relief is shown, and coastlines are shaded using tinting tools., Greenwich is used for the prime meridian, and no scale bar is present; the scale and coordinates were calculated using the map's graticule.

WORLD ON MERCATOR'S PROJECTION SHEWING THE VOYAGES OF CAPTAIN COOK ROUND THE WORLD
A world map showing Cook's 3 voyages in the Mercator projection. A legend for the vessel track sits in the bottom right corner, and continental borders are hand-coloured. An engraving of one of Cook's ships sit in the bottom centre., No scale bar is present, and Greenwich is used for the prime meridian; the scale was calculated from the map's graticule and the coordinates were obtained via georeferencing.