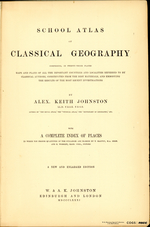 SCHOOL ATLAS OF CLASSICAL GEOGRAPHY
Attractive atlas of classical geography including a a map derived from Homer. Each map has multiple insets which, for the most part, show the same area at different periods. The index is particularly interesting as the preface points out that " the geographical position of every place where possible" is given with "its modern equivalent whenever ascertained". Our copy came from the Edgehill Chuch School for Girls in Windsor NS. 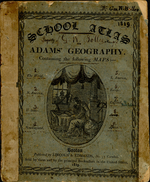 SCHOOL ATLAS TO ADAMS' GEOGRAPHY Containing the following MAPS 1. The World, 2. N. America, 3. U. States, 4. New England, 5. S. America, 6. Europe, 7. England, 8. Asia, 9. Africa
Atlas to accompany Adams' "Geography; or, A description of the world". The 1818 (3rd) edition was viewed and no indication of engraver or cartographer was indicated. 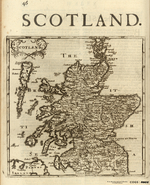 SCOTLAND
Map scale is not provided. Roman numerals are presented along the top of the map, but not in longitude intervals.

SHROP SHIRE Drawn from the best Authorities by E. Bowen Geog'r to His Majesty
A map of Shropshire by Bowen for Hinton's Universal Magazine. The arms of Shrewsbury are detailed on the right side of the map. The coat of arms include three leopards faces dating back to the late 1300's. A scroll and foliage motif cartouche frames the map's title. The small hills of the area are shown through lightly hachuring, and larger towns/cities have generalized buildings. Etchings include small churches, fortifications, and town plans. A legend describes the map in the top left corner., The scale bar is in English miles, and the map uses London for its prime meridian; the scale and coordinates were calculated from the map's scale bar and graticule.

SKETCH OF THE NORTH EASTERN BOUNDARY Between GREAT BRITAIN AND THE UNITED STATES as Settled by Treaty Aug't 9th, 1842
Note outside the neat lines: "Published Sept. 29th, 1842, by Ja's Wyld, Geographer to the Queen, & H.R.H. Prince Albert. Charing Cross East London". There is no scale bar; the scale was calculated based on increments of latitude., Represents the New Brunswick / Maine border as settled by the Webster-Ashburton Treaty in 1842. Includes "Old Boundary as Claimed by Great Britain" and "New Boundary Claimed by Great Britain" and "Boundary Claimed by The United States" and "Boundary as Settled by the Treaty Award of the King of Holland".

SKETCH of TONGATABOO HARBOUR 1777
The map orientation is inverted from a normal map reading position with South on top.

SOMERSET SHIRE Drawn from the best authorities
Includes an engraving of the Arms of Bath, London is used as the prime meridian. The scale is in British Statute Miles. 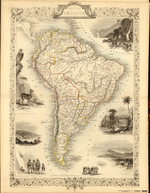 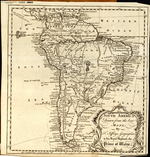 SOUTH AMERICA Drawn from the best MAPS
Map depicts account of European settlements in South America. Seafaring tracks of note depicted on map include: track in the quest of the Acaulca Ship and track to the South Sea. Short annotations on make include: "Port discovered by S. F. Drake"; "In this Harb. of the Ann Pink of Com. Ansor Squad. Anchor"; " Here about the Wager was lost"., Map of South America. Prime Meridian is London. Scale was determined by measuring between 10 Degrees of Latitude. 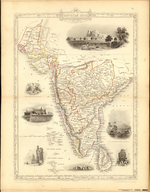 SOUTHERN INDIA INCLUDING THE PRESIDENCIES OF BOMBAY & MADRAS
Includes vignettes of Shuhur, Jeypoor; Tomb of Sultan Mahomet Shah, Bejapoor; the Government House, Calcutta; and the Seal of the East India Company.

SPAIN and PORTUGAL
Map scale in is English Leagues and uses Ferro Meridian. 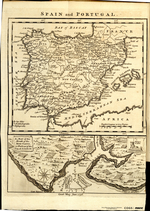 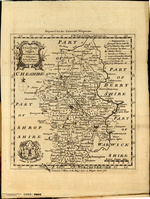 STAFFORD SHIRE, Drawn from the best Authoiries by Eman. Bowen Geog'r to His Majesty
A map of the county of Shropshire for Hinton's Universal Magazine. The arms of Stafford are shown in the bottom left corner. The crest includes two Figure 8 knots, a crenellation battlement tower, and one King Richard Lion emblem. The cartouche framing the map's title and mark of responsibility jad sp,e foliage and scrollwork. The right top corner Explanation of boroughs, market towns, parishes, villages, and croft roads corresponds to items on map in described in adjoining text., The map's scale bar is in English miles, and London is used for its prime meridian. Scale and coordinates were calculated from the physical map.

SUFFOLK, Drawn from late SURVEYS by Eman. Bowen Geog'r to His Majesty
A map of the county of Suffolk for Hinton's Universal Magazine. The coat of arms of Bury are present, and a detailed cartouche borders the work's title and mark of responsibility. An elaborate cartouche frames the map title with authority given to Eman. Bowen as engraver. The Arms of Bury placed in the right top corer show a scroll motif cartouche with vegetation and three crowns pierced with two crossed arrows. roadways, town centers, and reliefe are detailed. An explanation of borough, market towns, and watermills in placed at center top of map. Water mills along rivers are symbolized, along with members of parliament of areas. and recently surveyed roads., The scale bar is in English miles, and London is used for the prime meridian.